Thousands took to the streets across Europe and Australia on Saturday, as did hundreds in Tokyo and Seoul, in support of days of US protests against police brutality.

The rolling, global protests reflect rising anger over police treatment of ethnic minorities, sparked by the May 25 killing of George Floyd in Minneapolis after a police officer detaining him knelt on his neck for nearly nine minutes as fellow officers stood by. 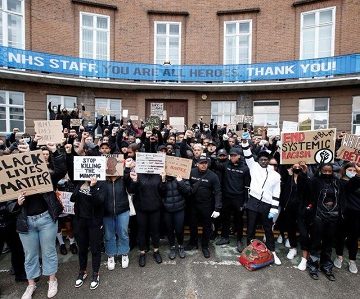 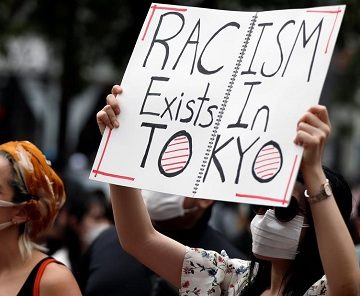 Europe has seen an unprecedented wave of anti-racism rallies drawing tens of thousands onto the streets.

In London, thousands of protesters ignored the wet weather to crowd into Parliament Square, wearing face masks amid the coronavirus threat and waving placards and chanting: “No justice, no peace, no racist police.”

Interior minister Priti Patel urged people not to protest in view of the pandemic, which has killed more people in Britain than anywhere else in the world outside the U.S.

“I completely understand people’s views and their desire for the right to protest but … we are in a health pandemic across the United Kingdom,” Patel told UK broadcasters. “I would say to those who want to protest – please don’t.”

In Berlin, demonstrators filled the central Alexanderplatz, while other protests were held in Hamburg and Warsaw.

In Paris, the authorities had banned demonstrations planned outside the U.S. Embassy and on the lawns near the Eiffel Tower.

Several hundred protesters, some holding “Black Lives Matters” signs, nonetheless gathered on Place de la Concorde, close to the Embassy. Police had installed a long barrier across the square to prevent access to the embassy, which is also close to the Elysee presidential palace.

Demonstrations in the Asia-Pacific region were limited, however, by social-distancing curbs aiming at stopping the spread of the virus.

In Brisbane, one of several Australian cities where rallies were held, police estimated 10,000 people joined a peaceful protest on Saturday, wearing masks and holding “Black Lives Matter” placards. Many wrapped themselves in indigenous flags, calling for an end to police mistreatment of indigenous Australians.

Banners and slogans have focused not just on George Floyd but on a string of other controversies in specific countries as well as the mistreatment of minorities in general.

In Sydney, a last-minute court decision overruled a coronavirus ban as several thousand people marched amid a heavy police presence.

In Tokyo, marchers protested against what they said was police mistreatment of a Kurdish man who says he was stopped while driving and shoved to the ground. Organizers said they were also marching in support of the Black Lives Matter movement.

“I want to show that there’s racism in Japan now,” said 17-year-old high school student Wakaba, who declined to give her family name.

In Seoul, dozens of South Korean activists and foreign residents gathered, some wearing black masks with “can’t breathe” in Korean, echoing George Floyd’s final words as he lay on the pavement.

With pandemic restrictions in Bangkok, activists went online, asking for video and photos of people wearing black, raising their fists and holding signs, and explaining why they “stand united behind Black Lives Matter”.

The Thai protesters plan to gather on the video-meeting platform Zoom on Sunday and observe 8 minutes 46 seconds of silence – the period that George Floyd was filmed pinned under the officer’s knee.

In the US, on Friday, prominent Democratic politicians adopted the slogans of the protests and announced reforms, as tensions remained high in major cities after days of largely peaceful protests that saw sporadic violence.