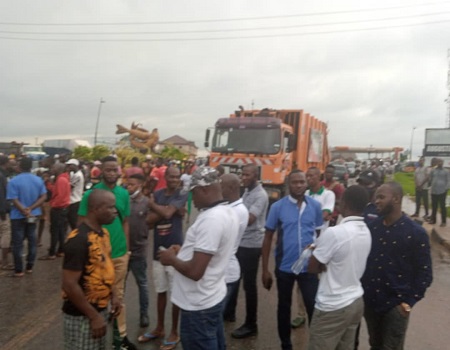 Indigenes and commuters in Epe Local Government Area of Lagos State have protested over the deplorable state of the road leading to the ancient town.

The protest which was organised by members of the National Union of Road Transport Workers, NURTW in conjunction with Epe youths began in the early hours of Tuesday shutting down both vehicular and human movement thereby causing massive traffic gridlock along the Lekki-Epe Expressway.

Tribune Online gathered that since the beginning of 2020, over six major accidents have occurred along Ibeju-Oko Orishun, Epe road killing scores of travellers and residents on the road.

To call the attention of the Lagos State Government to their plights, however, members of the NURTW and youths in the town in a peaceful protest barricaded the road while appealing to Governor Babajide Sanwo-Olu for urgent intervention.

Confirming the protest in a telephone conversation, Secretary to the Epe Local Government, Hon. Tunde Subair said the protest was held by youths in the town to express displeasure over the poor state of roads leading to the town.

Meanwhile, Legislator representing Epe Federal Constituency in the House of Representatives and Chairman, House Service Committee, Hon Wale Raji has called on residents in the town to be calm while assuring the protesters that construction work would commence on the road soon.

Raji in a press statement said he has been in talks with the Lagos State Government on the poor state of roads in Epe town.

Adding that, “Contract for the rehabilitation of the road has been awarded to Hitech Construction Company who are expected to commence work soon after all logistics and documentation have been sorted out.

“Following the distress calls and the reports I received on the protest and road blockage today, I again put a call through to the Deputy Governor, Dr Obafemi Hamzat who gave assurances that all logistics and documentations impeding the commencement of the project have been sorted out as at yesterday (Monday) and that the contractor will commence work on the road tomorrow (Wednesday).”

While appreciating the people for their perseverance, he, however, pleaded with them to remain calm and avoid breakdown of law and order.