• Amotekun operatives didn't operate at said area, anyone with evidence against us should bring it forward ― Commandant 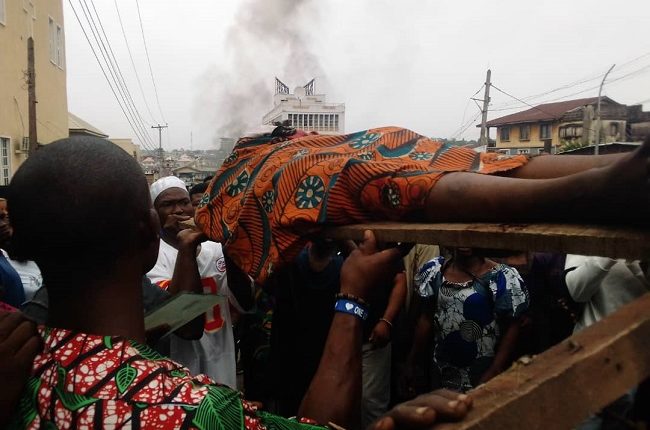 Protesters stormed the main entrance of the state secretariat, on Wednesday, to protest the killing of one 15-year-old boy named Peter during the wee hours of the day.

Conveying the corpse on the roof of a tricycle, the protesters alleged that the boy was shot dead by Amotekun personnel.

Peter, an apprentice working with a printing press around uncle Joe area, Mokola, was said to be on his way to purchase food at about 2 am when he was shot dead.

The gates leading into the state secretariat were hurriedly shut to bar the protesters who charged forward with intent to take the corpse into the Secretariat.

Human and vehicular movement into the State Secretariat was disrupted for many hours with workers and commuters seeking alternative routes.

Several teams of policemen were subsequently drafted to the state secretariat to calm the situation and they were stationed at the entrance to the Secretariat for several hours, to allow resumption of entry of people and vehicles.

Afterwards, a police vehicle conveyed the corpse to the morgue at Adeoyo hospital, Ibadan.

Speaking at the entrance of the State Secretariat, one of the protesters said: “We do not want Amotekun to be using guns. Seyi Makinde withdraw guns from Amotekun.

“It happened at Uncle Joe area of Mokola. He is into printing. He went to buy food. Amotekun operatives were shooting into the air and by 2 am on Wednesday they killed him. That is how they do.

“He is the only child of the family. He is writing the West African Senior School Certificate Examination (WASSCE) and learning painting and printing. He is the only son of the father.”

The Executive Assistant on Security to Governor Seyi Makinde, Mr Sunday Odukoya, made frantic efforts to appease the youths but they insisted on seeing the governor.

Olayanju said his men only responded to a distress call by residents of the Sango area that they were being robbed.

Members of the Sango landlords association, led by its Secretary, Olusola Kokori, met at the Amotekun office, also said that the community invited Amotekun operatives to rescue them from armed robbers who operated around 1.15 am on Wednesday.

Olusola said 17 communities from Sango to Alaro areas had come under armed robbery attacks for the past two months with no fewer than one person killed.

Speaking further, the Oyo Amotekun Commandant challenged anyone with evidence that the Amotekun operative was responsible for the killing of the boy to bring it forward.

On Amotekun being fingered as being behind the killing, he said those angered at activities of the outfit since its existence may be behind the allegation.

Olayanju said: “They were here at 6.30 am and 8 am and took the corpse to Secretariat. If you say Amotekun has killed someone, there should be evidence.

“All our vehicles have peculiar colour and unique number to trace. We have had cases like this in the past and because of the information given to us, we were able to trace.

“I can’t say what led to the activities of all these people. But because of what we have been doing for the past eight months, some people will not like Amotekun to be in existence and they feel we are a threat to them as we do not allow them to carry out their nefarious activities whether within the town or hinterland. Those who are peaceful and law-abiding have nothing to fear.

“We only operated at Sango community where we were called by the community members for being under attack from armed robbers.

“This is a political environment and some who are not happy with the present government will likely use such things to get at the governor.

“From the account of those who called us from Sango, they even said when the victims were evacuated to the hospital using Amotekun vehicle, they did not pass through Mokola.

“We will not be deterred; we are here to serve the people and as long as government want us to continue to do what we are sent to do, we will continue to do it.

“On my honour, Amotekun has nothing to do with the incident at Mokola. There are policemen and other private security men guarding the Lotto house and around the area, you can find out if the Amotekun vehicle was found around that area.

“If there is any evidence implicating any of my operatives, I assure you will not spare them. We don’t condone indiscipline and no one will be happy with extrajudicial killing. We are here to protect the people and can’t be going against the people.”

US freezes billions of dollars in Afghan reserves, blocks Taliban access to cash