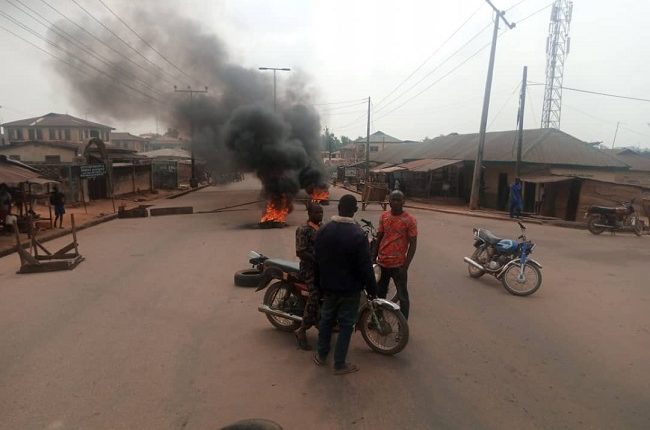 There was a protest in Isaba-Ekiti, Ikole local government area of Ekiti state, on Saturday, following the killing of two farmers by suspected Fulani herdsmen in the community.

One of the victims was identified as Toyin Akeju popularly referred to as Jisoro in the community while the other was said to be a labourer simply known as Daodu invited to work on the farm.

They were said to have been shot dead on their farm, on Friday.

A reliable source who spoke with Tribune Online noted that the two victims were declared missing, on Friday, after they failed to return home from the farm.

He added that the families approached the Amotekun corps who initiated a search team alongside the local hunters and the police to the farm where they met their corpses with gunshot wounds, on Saturday morning.

The source explained that the incident was a reprisal attack by the herdsmen who were challenged by the farmers, on Thursday on the farm.

According to him, ” The two of them went to the farm, on Friday, and they did not return throughout which makes the families report to the Amotekun corps. The Amotekun operatives went to the farm searching for them only to meet their lifeless bodies with gunshots, on Saturday morning.

” Obviously, it was a reprisal attack because, on Thursday, these particular farmers were in the farm and had issues with the herdsmen to the extent that they overpowered them and collected cutlasses from the herders.

” The herders went home and returned, on Friday to commit this dastardly act against the farmers who only challenged them a day earlier. It is a very sad situation.”

When contacted, the Amotekun corps commander, Brigadier General Joe Komolafe (retd) who confirmed the killing, said his men were already on the trail of the criminal elements.

” I can confirm that the two farmers were allegedly killed by the herdsmen after an altercation they earlier had on Thursday. We have handed over their corpses to the police while we continue with our investigations,” he said.

Komolafe advised residents to go about their normal activities without any fear, saying the corps would do everything possible to put an end to attacks by suspected herdsmen.

On his part, the Police Public Relations Officer (PPRO) ASP Sunday Abutu noted that it was a confrontation between the farmers and people suspected to be Fulani herdsmen who were alleged to have been terrorising the Ipao-Oke Ako-Irele axis of the council area.

Abutu added that the deceased’s corpses have been recovered from the Amotekun corps and deposited in the morgue at Ikole General Hospital.

According to him, “There was a crisis between some farmers and the herders, in the process, there were casualties. The police were contacted and operatives have been deployed to that axis to maintain peace.

“Meanwhile investigation has already commenced to unravel the reason for the crisis and to ensure that culprits are brought to book.

Abutu said the Police Commissioner, Mr Tunde Mobayo, has called for calm, saying his men are on the trail of the suspected killers.

Meanwhile, the development made residents in the community to troop out in their large number, on Saturday, protesting over the killing of the two persons.

The protesters, comprising youths, women and the aged were seen at the centre of the town burning tyres in demonstration of their displeasure to the killing.

Vehicular and commercial activities were affected as major roads in the community were blocked by the angry protesters.

The British Parliament at the Westminster Hall held a debate on ‘e-petition 554150, relating to Nigeria and the sanctions regime’ on Monday. The government of the United Kingdom has however responded…Protest rocks Ekiti community