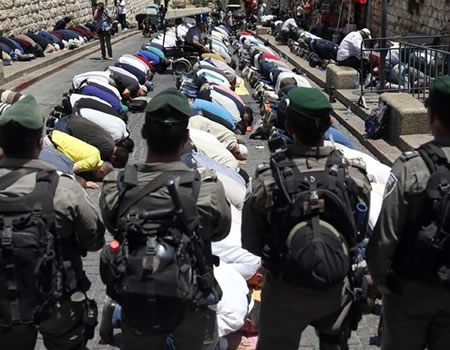 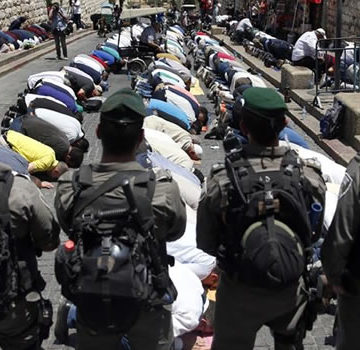 PRESIDENT Mahmoud Abbas’ Fatah party has called for a “Day of Rage” to protest against new security measures introduced by Israel at a Jerusalem site which is holy to both Muslims and Jews.

The call follows the implementation of metal detectors and turnstiles at the entrance of al-Aqsa compound after a deadly shootout there on Friday.

In that incident, two Israeli security officers died after an alleged attack by three Palestinians – who were themselves killed by Israeli police following the violence.

Tensions have soared since Friday.

The Red Cross said on Tuesday that at least 50 Palestinians were wounded in overnight clashes with Israeli police remaining near the sacred site, known as the Temple Mount to Jews and the Noble Sanctuary to Muslims.

At least four paramedics were injured, and 15 others were hit by rubber bullets, the charity said.

The Hamas and Islamic Jihad movements have also called for protests in the West Bank and Gaza Strip over the new security measures.

The “Day of Rage” is set to take place on Wednesday.

“For the third day now, the Islamic Waqf authority – which runs the al-Aqsa Mosque compound – is refusing to enter through the Israeli metal detectors,” said Al Jazeera’s Harry Fawcett, reporting from Jerusalem.

“[The authority] and the many growing number of worshippers outside the mosque see [the security measures] as an imposition of Israeli sovereignty in a holy place, and more generally as an Israeli encroachment in occupied East Jerusalem.

“The Israelis are saying that this is an important security measure after the deadly attack which took place on Friday.”

Fatah is calling for Friday prayers to be conducted in public squares in Palestinian cities to denounce what they described as “terrorist procedures” by Israel in occupied East Jerusalem.

Palestinians have already been performing prayers outside the compound in protest, since it was reopened on Sunday after a two-day closure.

Jerusalem Grand Mufti Mohammed Ahmed Hussein criticised the new measures as altering the status quo, which gives Muslims religious control over the site and permits Jews to visit but not pray there.

The Palestinians fear Israel is trying to retake control of the site by stealth. Prime Minister Benjamin Netanyahu stressed on Friday that he did not want to alter the status quo.

The site houses the al-Aqsa Mosque and the Dome of the Rock shrine, Islam’s third holiest site after Mecca and Medina, but also the ruins of the Biblical Jewish Temple.

Questions about control of the site frequently lead to outbursts of fighting.

After Friday’s alleged attack, Israel closed off the area, preventing Friday prayers at the al-Aqsa Mosque for the first time in decades.

Mahmoud Abbas, who was quick to condemn the shooting attacks in a telephone call to Israeli Prime Minister Benjamin Netanyahu, is currently in Beijing on a three-day visit to meet Chinese President Xi Jinping.