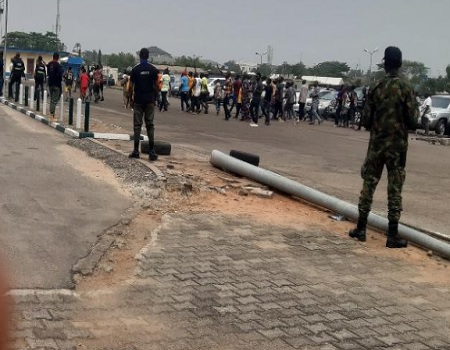 THERE was heavy security as the national chairman of the All Progressives Congress (APC), Comrade Adams Oshiomhole, arrived Benin, the Edo State capital on Saturday for the burial ceremony of Madam Cecilia Agbonyinma, the mother of a former member of the House of Representatives, Mr Ehiozuwa Agbonyinma.

A smiling Oshiomhole who was received by former deputy governor, Dr Pius Odubu; former secretary to Edo State government, Pastor Osagie Ize-Iyamu; Gen. Charles Airhiavbere and other top leaders of APC  as they brushed aside protests by some thugs who attempted to disrupt the airport ceremony where thousands of the ruling party supporters came to welcome him.

Heavily armed security personnel were mobilised to the airport following reports that the youth in droves were at the airport to cause mayhem.

Armed soldiers were stationed at the airport entrance gate as well as two police vehicles while operatives of the Department of State Security (DSS), Nigeria Security and Civil Defence Corps (NSDC) manned the various points of the airport and check the noisy hoodlums.

Some APC chieftains who refused to disclose their names, however, accused some top government officials of being in league with the political thugs, insisting that it was wrong for them to always mobilise thugs to harass the party’s national chairman.

A top Edo government official who pleaded anonymity countered, denying the government’s involvement in the airport incident which has since become a routine.

It would be recalled that some political thugs were shot near the Benin Airport last December.

The protesting hoodlums set fire on old vehicle tires along the Airport road in an attempt to block the motorcade of the party’s national chairman on his way to his Benin City residence.

Everything you need to know about Deontay Wilder vs. Tyson Fury II