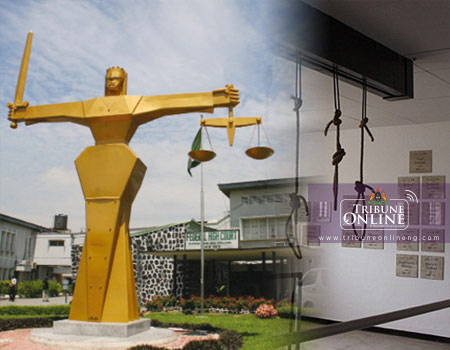 THE trial of the former Adamawa State governor, Murtala Nyako was on Thursday stalled, following the failure of prosecution to serve the defence with details of evidence sought to be tendered in court.

The former governor is standing trial over allegations of fraudulent diversion of N29 billion belonging to the Adamawa state government.

The trial was earlier scheduled to continue on Thursday with the evidence of the 15th prosecution witness,  Augustina Watamia, but when the witness was called, the defense counsel objected to the commencement of Mrs Watamia’s evidence on the grounds that, allowing her to give evidence would amount to a negation of their right to fair hearing.

The Economic and Financial Crimes Commission (EFCC) had slammed a 37-count charge against Nyako, his son, Abdul-Aziz Nyako and a third defendant, Zulkifikk Abba.

Explaining the reason for their stand, on Thursday, counsel representing Nyako Y. C. Maikyau (SAN) said although he is aware that the prosecution witness, a staff of the Adamawa State government was subpoenaed to appear in court, his team are yet to be provided with the details of evidence intended to be provided by the witness.

Maikyau said it was imperative for the prosecution to provide his client with the information intended to be presented in court by the witness, in compliance with the constitutional provisions for a fair hearing.

The Senior counsel said the EFCC has the constitutional prerogative to receive documents from any organisation in the country, for a criminal related matter, adding that the commission’s right to invite any person to serve as witness in a criminal case should be considered in relation to the right of the prosecution to serve the defense with details intended to be presented in court by any of its witness.

Responding, the prosecution counsel, Rotimi Jacobs (SAN) said he did not initially provide the defense with the witness’ statement because previous court rulings had provided that subpoenaed witnesses may be allowed to provide evidence in court, without necessarily giving the evidence to counsel, ahead of its presentation.

He however added that he would undertake to provide copies of the witness’ statements to the defense counsel.

But, Maikyau objected to the submission of the prosecution counsel, adding that the arguments put forward by Jacobs could only be viable in a civil matter.

After listening to arguments of counsel in the matter, the trial judge, Justice Okon Abang adjourned the matter till October 26, 2017 for continuation of trial.