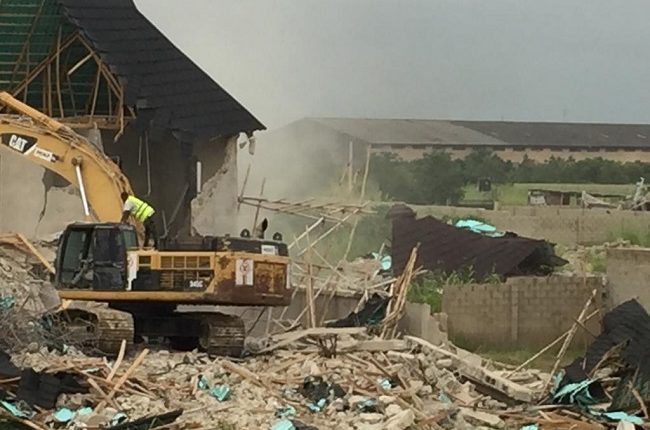 Property owners in Water Front Estate, Ibeshe in Ikorodu area of Lagos State have instituted a N500m suit against the Lagos State Governor, Babajide SanwoOlu and four others; the Inspector General of Police, Attorney-General of Lagos State, Lagos State Task Force on Land Grabber and its Chairman, Mr. Owolabi Arole, before the Federal High Court sitting in Lagos, for pulling down their structures and locking some of them up

The applicants; Alhaji Yinus Adedokun, Mrs. Nasiru Funke, Mr Gabriel Oluwadare, Mr. Will Atanda and Demola Adesoye, representing 44 others, are in the suit delineated FHC/CSL/956/2021, praying for an order of court compelling the respondents to pay them the sum of five hundred million naira as exemplary damages for the flagrant and oppressive violation of their fundamental rights to fair hearing as guaranteed by the 1999 Constitution.

The applicants through their lawyer, Olusola Salawu are also praying for a declaration that the respondents’ act of demolition of their houses and properties without due process of the law is unlawful, illegal, unconstitutional and a violation of their fundamental right to own property as guaranteed under the provision of Section 43 and 44 of the 1999 Constitution.

They also prayed the a declaration of the that the locking up of  10 of the applicants on July 8, 2021 in a black Maria for over 12hours without justifiable reason during the demolition of their houses is a flagrant violation of their fundamental rights to liberty and dignity as guaranteed by Section 35 of1999 Constitution.

In a 25-paragraph affidavit deposed to by Alhaji Yinus Adedokun, he stated that the applicants at various times between the years 2009 – 2015 purchased landed properties at Ibeshe, Ikorodu area of Lagos State from the Shosanya Ajako Family who handed over possession to them, adding that the Shosanya Ajako Family has been in exclusive and undisturbed possession of the landed property from time immemorial before selling their landed properties to the applicants and the family issued receipts and executed agreement of sales at various times to them.

He added that sometimes on July 8, 2021, Mr. Arole, the Chairman of Lagos State Task Force on Land Grabbers in company of armed policemen came into the estate in about 10 trucks with bulldozers as early as 7 am in the morning to pull down their houses.

They urged the court to declare the acts of the respondents reprehensible, oppressive and an abuse of power.

No date has been fixed for hearing of the suit.

They alleged that they lost multi-million naira houses that were reduced to rubbles, adding that immediately after the demolition; hoodlums stormed the area and carted away doors, windows, and roofs of the demolished houses.