We are on top of the situation ― Govt 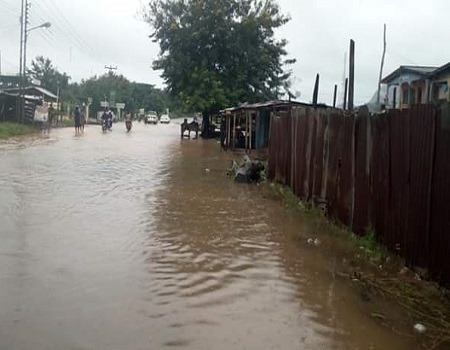 Majority of the streets in Ado-Ekiti, Ekiti capital was ravaged by flood following a downpour which began on Tuesday night.

The torrential rainfall started around 8 pm on Tuesday and fell intermittently throughout the night till about 6 am on Wednesday.

Nigerian Tribune gathered that the Ureje area, along the federal polytechnic road and other adjoining communities like Boom Town, Eminrin and Ijelu village, fondly called ‘Aba Oyinbo’ by commuters were all affected by the flood.

A source said the flood also surged into a church and about five houses located within the vicinity of Ureje Bridge.

A resident of the area, Mr Idowu Adaramoye, noted that the bridge on Ado-Ijan-Ikare road, which also linked the capital city to the Federal Polytechnic region was overrun by the flood around 1 am and lasted till 6 am.

He said commuters travelling along that route between that six hours had to pack their vehicles at the nearby filling stations and waited until it subsided.

“Nobody could cross that bridge to the Polytechnic side or go into Ado Ekiti city. Most of the residents had to wake up and caught a glimpse of the ravaging fast-moving water,” he said

Also, residents of the Boom Town, Eminrin, had to stay indoors till 12 noon before they could cross Ureje stream that devastated their environment.

The Chairman of the community, Mr.Yemi Oladimeji, appealed to government to dredge the stream to lower the water to prevent recurrence of flood in the area.

He said, “this Ureje stream was dredged about three years ago, but the job was not well done and the effect is what we are feeling today.

“About four houses could have been destroyed but for communal efforts made to ensure that we concrete the same inner Ureje bridge that linked us with Oke Ila region.

“There was need for government to do more thorough job to reduce the water level.”

In Ikere-Ekiti, residents also felt a dose of the devastation as the flood rendered many homeless while property worth millions of naira were destroyed.

A resident while speaking with our correspondent said, ” As you can see now, all my belongings have been destroyed as a result of this flood.

“I can only call on government to assist us in this difficult period because we even heard that we are going to have more rainfall next month (September) and of course will lead to flood.”

Speaking with Tribune Online in an interview, the commissioner for Environment in the state, Honourable Olugbenga Agbeyo said that the government was doing everything possible to address the situation.

While revealing that the Ekiti State Governor, Dr Kayode Fayemi had approached the World Bank for financial grants, Agbeyo noted that about 235 locations had been identified across the state.

” When we got the report today (Wednesday), we decided to move around and see things not only in Ado but in other places because we identified 234 locations. We discovered there must be urgent attention.

” We will need about N29 billion to address this situation and Governor Kayode Fayemi has approached the World bank for assistance.

” I want to inform our people that government is not sleeping on this issue of flood and very soon we will get over it in Ekiti,” he said.