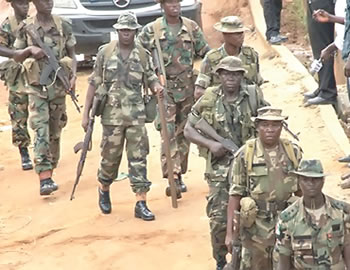 THE new General Officer Commanding of the 2 Division of the Nigerian Army, Major General Kasimu Abdulkarim, has enjoined army officers serving in the Division to exhibit professionalism at all times and avoid involvement in politics.

Major General Abdulkarim gave the admonition on Friday at the headquarters of the Division, Adekunle Fajuyi Cantonment, in Ibadan, Oyo State, during the handing over ceremony which signified his assumption of duty after his appointment as the substantive GOC.

Before his assumption of office, the Commander of the Engineer Construction Command, Ede, Osun State, Brigadier General Jude Egbudom, was in charge of the Division in acting capacity after the compulsory retirement of the former GOC in June.

The new GOC said that as military professionals, he and other officers and men would use techniques that would bring success to Nigerian Army leaders and the nation at large, harping on the need to be “abreast of our rules of engagement and analyse our challenges in line with the law and human rights.”

“2 Division is a subset of the Nigerian Army and the Nigerian society which is directly affected by societal change. The Division must be abreast of the Chief of Army Staff’s vision, which is to be a professionally responsive Nigerian Army in the discharge of its constitutional roles.