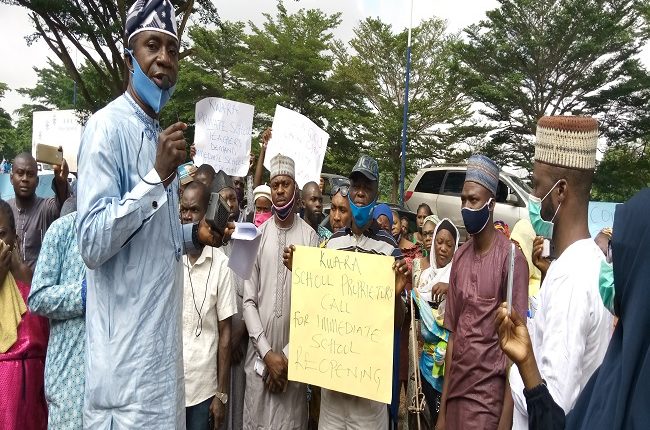 Parents, teachers and proprietors of private schools in Kwara state on Friday protested against continued closure of schools by the state government over COVID-19 pandemic.

The people, who carried placards with such messages as “Kwara school proprietors call for immediate school reopening”, “Mr President, tell Kwara governor to reopen our schools now”, “Schools in other states are opened, why not Kwara?”, during the protest in Ilorin, argued that the long closure of schools had ruined the lives of many of their wards, saying that some of the female ones had been impregnated.

“The over five months long holiday occasioned by the COVID-19 pandemic has caused lots of atrocities of different dimensions among the student. Many of the female students are already pregnant due to idleness while their male folks have been badly influenced by ills in the society”, one of the parents said.

The protesters, who included members of the National Association of Proprietors of Private Schools (NAPPS), accused the state government of a deliberate plan to ‘kill’ private schools by the stringent reopening protocols and conditions the state asked them to put in place.

The angry protesters said that the continued closure of schools had worsened their socio-economic lives, adding that they now live at the mercy of family members and friends.

Addressing the protesters, state chairman of the NAPPS, Dr Rahaman Lateef, he said the association is not folding its arms, adding that it has held series of negotiations with the state government on the safe reopening of schools and teachers’ welfare.

Dr Lateef also said that “NAPPS, as the representative of private schools in the state, has engaged the government and I am glad to tell you that the ministry of education has designed two school calendars and submitted same to Governor Abdulrahman Abdulrazaq and anytime from now the governor would announce the reopening of schools in the state”.

The NAPPS boss advised the state government, saying that, “it is for it to announce the likely date of resumption so that our schools in the state would heighten their preparation for resumption.

“The state government should as a matter of urgency, consider the plight of teachers in private schools by reopening the schools immediately, because their lives have been turned upside down in the last six months of inactivity, lack of jobs and salaries.

“Thirdly, COVID-19 should no longer be an excuse for the delayed reopening of schools as it has come to stay and people must learn to live with it. Thank God the SSS three students wrote their examinations without a spike in COVID-19 infections.

“Government should extend COVID-19 safety kits to private school children as we are nurturing Nigerians children whose parents have paid their taxes to the government”, he said.

He assured the protesters of communicating their grievances to the education Commissioner for onward transmission to the governor.