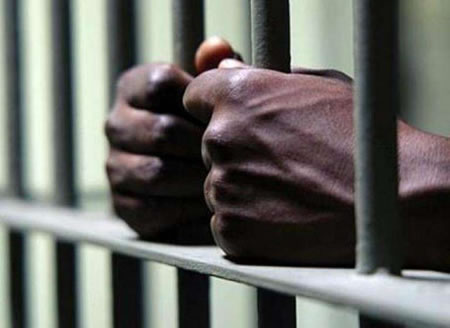 A convicted prisoner who from Kirikiri Prisons, defrauded a bank Manager of N12.3 million, was on Tuesday sentenced to 162 years in prison by an Ikeja High Court.

The convict, Ikechukwu Ogbu, was sentenced for defrauding one Mr Patrick Edetchukwu while serving a 10-year sentence for an undisclosed crime at the Kirikiri Maximum Prison.

Ogbu was charged alongside Chuks Ibebugbu for conspiring to defraud Edetchukwu.

The duo were arraigned on June 10, 2011 on a 10 count charge bordering on obtaining money by false pretences and stealing by the Economic and Financial Crimes Commission (EFCC).

Justice Lateefa Okunnu, however, in her judgment on Tuesday, discharged and acquitted Ibebugbu due to insufficient evidence provided by the prosecution during the trial.

Ogbu it was gathered defrauded Edechukwu between May and October 2009 while he was incarcerated  at the Kirikiri Prison of N12.3million under the pretence that he was detained at the Prison by the EFCC for allegedly bringing in foreign currency’ of $2.5million into the country.

He told the complainant that he needed some money to clear himself from the anti-graft agency, promising Edetchukwu that the $2.5million in the custody of the EFCC will be deposited in the bank.

Edetchukwu, a branch manager of the defunct  BankPHB  now Keystone Bank, wanting to meet his account deposit target at the bank, believed Ogbu’s tale and sourced for funds to give Ogbu to ‘sort himself out’ at the EFCC.

Okunnu in her judgment, noted that prison officials aided the crime by allowing Ogbu open a bank account and wear regular clothes instead of prison uniform.

“By allowing the defendant wear mufti clothes, the Kirikiri Maximum Prison facilitated the commission of the crime,” she said.

Pronouncing the sentence, Okunnu said “I have listened to the plea of counsel.

“I have noted that names of a lot of notable personalities were put on the line during the period when this crime was committed, and I have also noted that the defendant has remained unrepentant.

“I hereby sentence the defendant to 18 years each on counts two to ten,”Okunnu said.

Earlier, before the sentence was passed, the prosecuting counsel for the EFCC, Mr Nnaemeka Omewa requested for a stiff sentence for Ogbu.

“In just two years of his serving his prison term, he committed this heinous crime, imagine what will occur when he is allowed to live freely in society

“I hereby urge my Lordship to pass maximum sentence on the first defendant,” Omewa said.

However, lawyer to the convict, Mr Olanrewaju Ajanaku, in his plea for mercy before the court, asked for a light sentence, saying that Ogbu was now a changed man.

“I pray that the court should temper justice with mercy, the defendant has been in custody since 2009.

“His wife died in 2014, he has three children who are of tender age, his wings have been clipped ad he is now a changed man, “Ajankau said.

Tiwa Savage signs on as celebrity ambassador for polio eradication