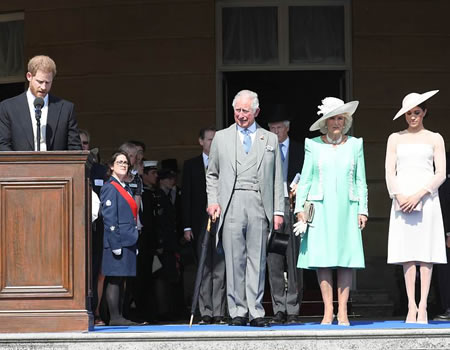 Prince Harry was attacked by a bee today during Meghan Markle’s first outing as the Duchess of Sussex after the newlyweds arrived at Prince Charles’s 70th birthday party at Buckingham Palace.

The Duchess of Sussex suffered a fit of the giggles on her first official engagement as a royal today when a bumblebee flew into her husband’s ear.

The new Duke of Sussex was giving a warm and witty speech in honour of his father, Prince Charles, at a garden party when the pesky insect circle his head and dive bombed him.

Harry, who was midway through the speech at Buckingham Palace in London suddenly went lost his place and said laughing: ‘To say… phffff….that bee really got me!’

Meghan, wearing a white dress by Goat and a hat by Philip Treacy, burst into giggles, with a hand over her mouth. Charles looked slightly bemused and she leant across the laughing Duchess of Cornwall to explain to him what had happened.

The lighter moment came as Harry and Meghan, who enjoyed only a brief private getaway following their wedding on Saturday, returned to duty for the garden party today, delaying their honeymoon to honour the Prince.

Harry said today: ‘We’re here today to reflect on and to celebrate my father’s dedicated support to all of you and the work that you do.

“But first, I would like us to take a moment to remember all those affected by the tragic events at the Manchester Arena a year ago. We are fortunate to have over 250 representatives of the emergency services here today.

“It is right that we take a moment to recognise the amazing work they do every day, and how each member of our blue light services rise to meet the challenge of tragic events such as the attack a year ago.

“We are also joined by Youth United Cadets. Their organisation also provided triage support to the medical crews on the attack.

“So, on behalf of my family, and everyone here, I would like to say thank you to the emergency services and all those who supported the injured and affected.

“My brother William would be here today, were he not attending a service in Manchester to honour their victims, their families, the emergency services and the survivors this afternoon.

“Our thoughts are with those who lost loved ones and those still dealing with the experiences of that night. It really is amazing to see so many of you here today for this family celebration.

“I say family, because this is a chance for us to honour to Prince of Wales’s work over the last 40-plus years, with all of his charities, patronages and military associations – and, as you all know, my father views all of your organisations like an extended family.’

Corporal Gregory Gilbert, 2nd Battalion, Irish Regiment of Canada, said meeting Harry and Meghan was ‘wonderful’ after he and his colleagues flew over especially for the party.

Second Lieutenant Reid Killen said: ‘It felt like talking to my youngest son, the Duke reminds me very much of him.

“He’s always joking around and Harry has the same sense of humour.’

His wife Janine Killen said: ‘I always thought the Royals were from far, far away but they are very down to earth. They can meet anybody anywhere and have the right words to say.”

Major Kirk Langdon said: “It was excellent meeting the Duke and Duchess, it was everything I thought it would be.”

He added: “We all came over from Canada, 10 of us were asked to come out and celebrate. We will definitely be going to Windsor and all the other sites.”

Delta 2019: Okowa is not my godfather —Diden