Primate calls on FG to beef up security in Nigeria 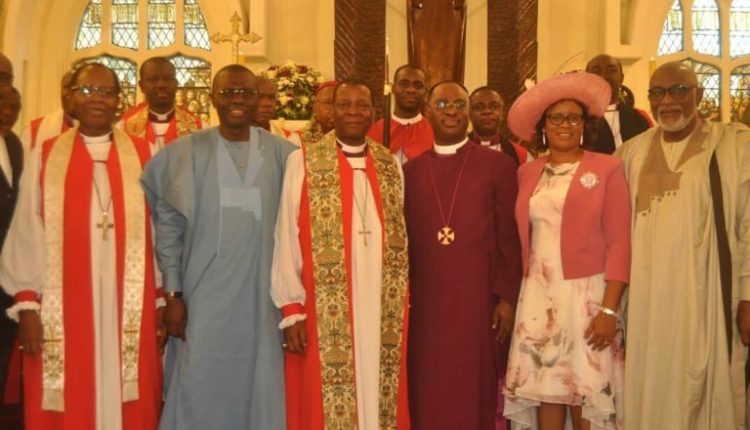 The Primate, Church of Nigeria (Anglican Communion), Most Rev. Nicholas Okoh has called on the government to beef up security in Nigeria as he decried the state of insecurity in the country.

Okoh gave this charge at the 10th consecration anniversary and 50th birthday celebration of the Rt. Rev. Humphrey Olumakaiye, Diocesan Bishop of Lagos at the Cathedral Church of Christ Marina, Lagos.

Okoh said that quite a number of people are indulging in criminal activities due to security challenges confronting the country.

“The alarming rate in which people delve into criminal activities in this country is very worrisome and this is as a result of security challenges in Nigeria.

“Government at all levels should do the needful by beefing security across the country as it would enhance development in the nation”, he said.

He decried the rate of insecurity experienced on roads in the country, as well as in the farms and communities as he said these have become proverbial.

The primate also urged citizens in the various states in the country to pray for their governors to guide the people that elected them into office aright.

Okoh who described the celebrant as a true man of God said Olumakaiye made remarkable achievement in Illesha Diocese within the years he served there.

“He transformed the parish in Ilesha, he settled a long time dispute between two communities.

“It is very difficult for the children of clerics to become clerics, your parents trained you well, the positive testimony of your parents rubbed off on you,” he said.

“God called some servants to attain some special needs. The call of God is never a selfish one, it is not for the sake of the one called, because he is a messenger, therefore he has to be obedient.

“God does not call anyone to be rich; wealth is a by-product. it is against this background that we say Olumakaiye is fulfilling his commitment to God,” he said.

Okoh also urged those who have been charged with the management of things to bear good fruits in their assigned roles.

“You are not only to serve, but you are also to go the extra mile. It is important to be good. Struggle to excel by praying, fasting and being concerned about the people you are in charge of.

“50 years is remarkable, it means you are not a boy or an old man, but in between, “we give thanks to God for notable achievements recorded, 50 years to you is a long time. There are people who have no jobs at 50.

The primate charged the celebrant to be humble at all times, adding that God has enabled him to stand on a high pedestal at his golden age.

“50 is golden with golden responsibilities. Some people will tell you to take it easy, but I say no to that because you are still young and should work harder.

“At 50 there is a need for restoration. 50 is a jubilee year, there are many things that should be restored. Move ahead and review yourself as you go on and move according to the pace of God,’’ he said.

While thanking God, as well as appreciating all who came to celebrate him, Olumakaiye prayed that God grants him the grace of good health and long life to do more in propagating the gospel of Jesus Christ.

“My birth was miraculous. I see myself as a man who God has blessed. I was ordained at the age of 23, became archdeacon and became a bishop and by the grace of God, I am now an in the premier diocese of Lagos.

“I will do everything possible to put my totality in God work to make sure we reach all the nooks and crannies of the diocese so we can all benefit in the kingdom”, he said.

He said the diocese of Lagos believes in the efficacy of prayer and that God has given the flock and himself mandates which they will fulfill together.

“We believe so much in the efficacy of prayer. God has given us the mandates together and we shall get there to fulfill the five-fold ministries of Priestly, Pastoral, Prophetic, Prayer and Praise to jointly glorify God, edify believers and multiply disciples for the Lord Jesus Christ.

While harping on the unity of members for the diocese to perform exploits, the bishop urged the faithful to go an extra mile to do more in fulfilling the will of God.

The event was attended by a host of clergymen and dignitaries including the Dean Emeritus of the Archdiocese of Lagos (Anglican Communion), Most Rev. Ephraim A. Ademowo, the executive governor of Lagos State, Mr. Babajide Sanwo-Olu, Gov. Rotimi Akeredolu (SAN) of Ondo State and Senior Special Asst. to the president on sustainable development goals, Princess Adejoke Orelope-Adefulire