Prices of major foodstuffs in South-West markets increase by 100% 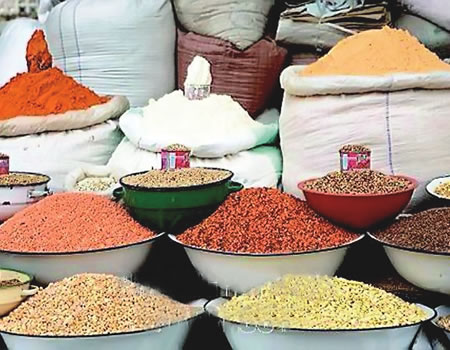 PRICES of some major foodstuffs have gone up by 100 per cent in Southwest markets, with stakeholders expressing concern over the relentless increment, a survey by the News Agency of Nigeria (NAN) has shown.

Stakeholders in the zone have also called on the government to urgently address the situation before things get out of hand. Most of the respondents who spoke with NAN attributed the astronomical increase in the prices of foodstuffs to effects of the COVID-19 pandemic.

Others, however, attributed the trend to increase in transport fares, caused by the recent increase in petrol price and the inability of farmers to produce enough food for domestic consumption, while the nation’s borders remain shut.

NAN survey at the Ota market in Ogun showed that the price of onions had almost doubled within the last one month, as a bag, which was sold for N50,000 in October, is now sold between N90,000 and N100,000. With respect to retail prices, four small pieces of onions, which were N50 in October are now N200.

NAN also observed that the prices of yam followed a similar pattern, as a dozen of big yam, which was sold for N4,800 in October, is now between N9,000 and N10,000. Mr Saheed Ismaila, a yam seller at the popular Shasha market in Akure North Local Government Area of Ondo State, said five pieces of medium yam tubers, which were sold between N1,500 and N1,800 in October, are now between N2,500 and N3,000.

“We are selling based on how much we bought the item. We usually travel to Minna and Abuja to buy them and we have to add the cost of transport, hence the price increase,” Ismaila said. Mrs Toyin Adams, who sells palm oil at Shasha market, Akure, said that a 25 litre keg of palm oil, which used to cost N11,000 about a month ago, is now sold for N13,500.

“Only God knows what the future holds for foodstuff prices in the country,” Adams lamented.

It was gathered that before the COVID-19 pandemic, a 25-litre keg of palm oil was sold between N8,000 and N9,000 in many markets in the Southwest. Although the commodity increased to N12,000 shortly after the pandemic, it is now sold for N14,000 in most markets in Ogun.

At the popular Kuto market in Abeokuta, a bag of beans, of which the price fluctuated between N19,000 and N23,000 in October, is now sold for N28,000, while a plastic measure of the foodstuff has increased from N350 in October to N550 in November.

The survey, however, revealed a downward trend in the prices of garri, tomato and pepper in some of the markets. At Agbeni market in Ibadan, a wholesale trader, Mrs Michael Abimbola, said a bag of onion, which was sold for N12,000 at the onset of coronavirus in March, is now N30,000, while price of a bag of beans has increased from N15,000 to N30,000 within the same period.

According to Abimbola, the price of maize has gone up too, with a bag now N17,000 up from N8,000. She added that a 25-litre keg of palm oil, which was sold for N7,000 before, is now N15,000, while vegetable oil price had jumped from N12,000 to N17,000. Abimbola attributed the hike in prices of the foodstuffs to fuel price increase, poor infrastructure, and lack of adequate rainfall in the year.

“For onion, which is being brought from the North, it takes transporters like a week before reaching here (Ibadan) and they have to fathom the transportation cost into the price,” she said. The Chairman, Onion Sellers’ Association in Oyo State, Alhaji Adeola Azeez, advised that the government should provide modern storage facilities for preserving onions in the country to prevent frequent scarcity of the commodity, particularly during off-season.

Azeez, who is the leader of onion sellers at Shasha Pepper Market in Ibadan, attributed the hike in prices of most foodstuffs to climate change and insecurity in many states of the North. Mrs Omobonke Adunola, a tomato seller at Bodija market, Ibadan and Mrs Munirat Akinade, a housewife, decried the rate at which prices of foodstuffs kept going up in the last one month.

While Adunola complained of low sales, caused by the price increase, Akinade said that huge sums of money now chase fewer goods, with incomes remaining stagnant. A civil servant in Ibadan, Mr Olusola Rowland, called on the government to urgently address the looming food crisis in the country by introducing a price control mechanism to save the masses from imminent hunger.

At Owode market, Ede and Igbona market, Osogbo, both in Osun, a five-litre keg of palm oil is now sold between N2,500 and N2,800, as against N1,800 and N2,000 about a month ago. The price of garri in the two markets has however, remained stable, at N300 per plastic measure, while the popular garri Ijebu, which is the most expensive, is sold between N600 and N650.

A rice seller at Owode market, Mrs Morakinyo Adeniyonu, said the closure of the nation’s borders and the coronavirus lockdown might have caused the upsurge in the price of rice in the market. Mrs Abosede Adunlowo, a foodstuff seller at Akindeko market, Osogbo, said prices of food items had remained unstable in the last few months due to the coronavirus pandemic, compounded by the recent EndSARS protests across the country.

The traders appealed to the government to help farmers, where necessary, in order to increase food production and encourage the youth to go into farming to address food insecurity. The situation was not different in Ekiti and Kwara, where residents, particularly housewives lamented the high cost of food items in the markets.

The market survey conducted in some markets in Ekiti showed an increase between 70 per cent and 100 per cent for some food items within two months, with traders and buyers calling for reduction in taxes as a way of bringing down prices.

According to them, the fast-approaching Christmas and New Year festivities may be celebrated amidst uncertainties, unless something urgent is done by the government to address the situation.