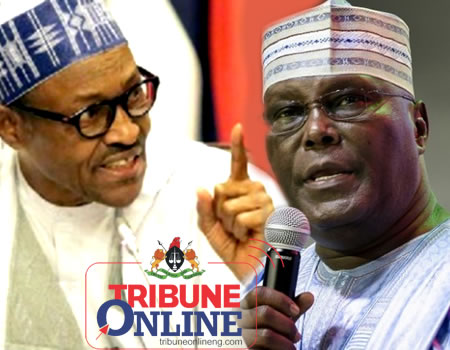 The Supreme Court will on Wednesday hear the 66 grounds of appeal brought before it by the Peoples Democratic Party (PDP) and its presidential candidate in the February 23, 2019 general election, Alhaji Atiku Abubakar, challenging the judgment of the Presidential Election Petition Tribunal (PEPT), which sat at the Court of Appeal, Abuja.

Although there has not been an official pronouncement from the Supreme Court on the date, Tribune Online, however, gathered that the court will hear the appeal on Wednesday.

Atiku and his party, in their appeal, held that the Tribunal erred in its judgment in their petition against the election of President Muhammadu Buhari of the All Progressive Congress.

The five-member panel led by Justice Mohammed Garba had in its judgment delivered on September 11, 2019, dismissed the petition filed by Atiku and his party for being incompetent and lacking in merit.

The panel in dismissing the petition held that Atiku and PDP were unable to substantiate their allegations that the election was rigged in favour of Buhari and the APC.

The Tribunal further held that the petitioners did not produce relevant witnesses to prove that Buhari did not possess the necessary educational qualification to contest for the office of the President of the Federal Republic of Nigeria.

The appeal at the apex court, as filed by Atiku and his party, centred on issues bordering around the qualification of Buhari in the election and the controversial Independent National Electoral Commission (INEC’s) server amongst others.

The grounds listed in the appeal include claims that the judgement of the tribunal was not based on the issues canvassed by the petitioners, especially in relation to the respondent’s academic qualifications.

Respondents in the appeal are, INEC, President Buhari and the APC.

Atiku and the PDP cited an instance where one of the respondent’s witnesses, rtd Major General Paul Tarfa (rtd) called by President Buhari’s lawyers said that they did not give their qualifications to the Military Board.

Tarfa’s testimony was against the claim by Buhari that the Nigeria military is in possession of his certificates.

“Secondly, Buhari said that he was recruited into the military in 1961 and Tarfa said in 1962, so what is the correct date of his recruitment into the army. Somebody is not telling the truth.

“The issue in question is who entered the different grades for him from both the Cambridge and the West African School Certificate results.”

Another ground of appeal is that the President’s Chief of Staff, Abba Kyari, brought the Cambridge documents dated July 18 and testified on July 20, 2019.

“The point here is that it was not pleaded when the respondent replied to the petition of Atiku and PDP. The position of the appellants is that in law, you don’t speak on documents not pleaded.”

The appellants are also claiming that the WAEC documents contradicted the Cambridge documents, describing it as a case of forgery and inconsistency in documents.

“The tribunal judgment was based on the Electoral Act section 52 (1) (B), but this aspect of the law has since been deleted in 2015. It is no longer in existence. This was the case in Wike Vs Peterside.

“If the judgment said INEC server was recklessly hacked, then, there is a server and, therefore, a criminal offence. Yet, INEC did not claim so or that its documents were stolen.

“How come the judge reached this scandalous decision?

The appellants are there praying the apex court to hold that the tribunal erred in its decision and consequently set the tribunal’s judgment aside and go ahead to grant all the reliefs sought.

Atiku and his party, in their petition filed on March 18, 2019, amongst other things alleged that INEC in connivance with agencies of government manipulated the outcome of the February 23 poll in favour of Buhari.

They further alleged that Buhari, at the time of contesting the poll was not qualified having not possessed requisite academic qualification and as such all votes credited to him in the election be regarded as wasted votes.

Atiku and PDP in the petition, therefore, urged the tribunal to nullify the emergence of Buhari on grounds of alleged irregularities, rigging, substantial non-compliance with the electoral provisions amongst others.

Among the grounds the petitioners were seeking the nullification of Buhari’s election was that the president lied on oath in his form CF001 submitted to INEC for his clearance for the election.

They, therefore, prayed the tribunal to declare them winner of the February 23 presidential election.

But the tribunal in its judgment on September 11, 2019, dismissed the petition for being incompetent and lacking in merit.

The tribunal resolved all issues raised by the petitioners in favour of Buhari, adding that the president did not lie but indeed possessed the mandatory qualification and even much more to contest for the presidential election.

While pointing out that the failure of Buhari in not attaching the said certificates in his form CF 001 did not amount to not having the certificates, Justice Garba held that there is no law that requires the attachment of certificates to the Form CF001 submitted to INEC to aid his clearance for the February 23 presidential poll.

The Tribunal held that “it is established that a candidate is not required under the Electoral Act to attach his certificate to his Form CF001 before a candidate is adjudged to have the requisite qualification to contest the election.”

The tribunal in his conclusion on the issue said both oral and documentary evidence before it proved that Buhari has more than secondary school certificate required to contest the election.

“The second respondent has more than secondary school certificate having attended various courses. He is not only qualified, but he is also eminently qualified,” the tribunal held.

Dissatisfied with the judgment, the petitioners had approached the apex court to reverse the judgment of the Tribunal.

Meanwhile, the APC, in a swift move against the petitioners has asked the Supreme Court to expunge Atiku’s experts’ reports and evidence from the record at the tribunal on 2019 presidential election.

The ruling party filed a cross-appeal at the apex court against the admission of the report and evidence of the three data analysts who testified for the petitioners at the Tribunal and whose evidence was admitted by the tribunal in the interest of natural justice.

The party, in the cross-appeal, wants the Supreme Court to expunge the evidence of the three Information Communication and Technology (ICT) experts who testified on the existence of server allegedly used by INEC to store results of the February 23 presidential election.

The three key witnesses are Segun Sowunmi, a media aide to Atiku, David Njoga, a Kenyan and Joseph Gbenga who are famous data analysts employed by Atiku to carry out forensic analysis of the presidential election results.

They had, in their testimony informed the tribunal that they analysed presidential election results state by state and found discrepancies in the results credited to Atiku and President Buhari.

Specifically, the three data analysts alleged that in the results sheets they analysed, the votes of Atiku were deliberately depleted while that of Buhari and APC were inflated.

The Kenyan expert, in his evidence specifically insisted that INEC used the server which he claimed to have penetrated to obtain the alleged authentic results of the February 23 presidential election which ran contrary to the one declared by the electoral body.