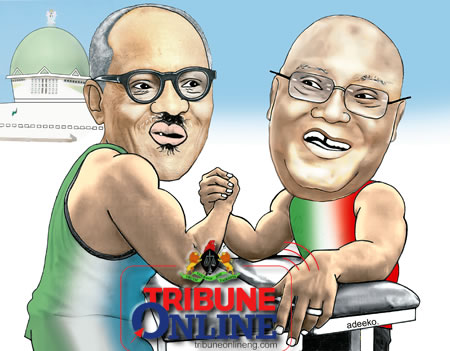 TODAY, the Presidential Election Petition Tribunal will deliver judgment in the petition filed by the Peoples Democratic Party (PDP) and its presidential candidate, Alhaji Atiku Abubakar, challenging President Muhammadu Buhari’s victory in the February 23 presidential election. Chairman of the panel, Justice Mohammed Garba, had, while reserving judgment on August 21, stated that the date would be communicated to all parties in the matter. The judgment will be delivered today in accordance with Section 134 (2) and (3) of the Electoral Act (2010) which provides for a 180-day time limit for the conclusion of election petitions.

In his final submissions before the panel, lead counsel for the Independent National Electoral Commission (INEC), Yunus Ustaz Usman (SAN), had  stated that the commission conducted the February 23 election in “total compliance with the Electoral Act and the petitioners can never dislodge that.” He had therefore asked the panel to dismiss the petition, which he said “was meant to test the river with both legs.” In a similar vein, Mr. Wole Olanipekun (SAN), the lead counsel for Buhari, had asked the tribunal to dismiss the petition for lacking in evidence, adding that Section 131 of the Nigerian Constitution did not demand certificates to be attached to the documents submitted by aspirants to the electoral commission. Besides, the counsel for the All Progressives Congress (APC), Lateef Fagbemi (SAN), said that the PDP and Atiku, who alleged electoral irregularities in 119,973 polling units in 8,809 wards in 774 local government areas in the country, called only 62 witnesses out of which only five led evidence from the polling units.

However, lead counsel for the PDP and Atiku, Levy Uzoukwu (SAN), asked the tribunal to hold that by virtue of Section 138(1) of Electoral Act, any candidate who submitted false information would nullify their candidacy. He noted that Buhari, in the Form CF001 that he submitted to INEC, listed three certificates, namely First School Leaving Certificate, WAEC and cadet certificate from the Military School, but failed to attach them to the form. According to him, “more worrisome is the fact that Buhari’s own witness, Major-General Paul Tafa (retd), who joined the Nigerian Army with him in 1962, told the tribunal that the recruits were not asked to submit their certificates to the Nigerian Army Board as claimed by Buhari in his form CF001.

He added: “At any rate, the Secretary of the Nigerian Army Board, Olatunde Olaleye, had, in a statement, clarified that Buhari had no single certificate in his personal file with the Nigerian Army.” The petitioner, therefore, urged the tribunal to nullify the participation of Buhari in the election on the grounds that he lied on oath to deceive Nigerians and to secure unlawful qualification for the election.

Truth be told, the judgment to be delivered today is a necessary step in the democratic process. Among other things, it will help to establish whether, in the eyes of the law, the February 23 presidential election complied substantially with the provisions of the Electoral Act and the country’s constitution and whether or not the lapses identified and well documented by observers did or did not significantly affect the outcome of the election. Crucially, the petitioners, namely Atiku and the PDP, took the right step in challenging the outcome of the election. By going to court rather than resorting to violence, they demonstrated a firm commitment to the country’s democracy. By the same token, the respondents, namely Buhari, the APC and INEC, demonstrated firm commitment to the democratic process by filing a defence at the tribunal as allowed by law. The ball is therefore now in the court of the judiciary, whose verdict will no doubt impinge significantly on the country’s electoral process and the democratic process for many years to come.

We urge the judiciary to discharge its duty in this matter and subsequent ones honestly and impartially. That is the only way it can play a crucial role in sustaining the country’s democracy. In the timeless words of the American rights activist and social justice campaigner, Martin Luther King (Jnr), injustice anywhere is a threat to justice everywhere. And as the Greek philosopher, Socrates, puts it: “Nothing is to be preferred before justice.” Democracy, we dare say, cannot be sustained when the judiciary shirks its responsibility to ensure justice in all matters brought before it. But whichever way the judgment goes, we advise the litigants and their supporters to take it in good faith, particularly as the case is still most likely coming before the apex court. They should not do anything to jeopardise the peace and security of the country.

There is no doubting the fact that millions of Nigerians are actively interested, and emotionally invested in the presidential election petition, and for valid reasons. Be that as it may, the point must always be borne in mind that there must first be a country before there can be partisan politicking or participation in the political process. It is therefore incumbent on all members of the public, in reacting to today’s judgment, to do so with civility and decorum. Sustaining the country’s fragile democracy certainly demands no less.

Covid-19 and the increasing job losses