Presidential committee member found dead in a pool of blood 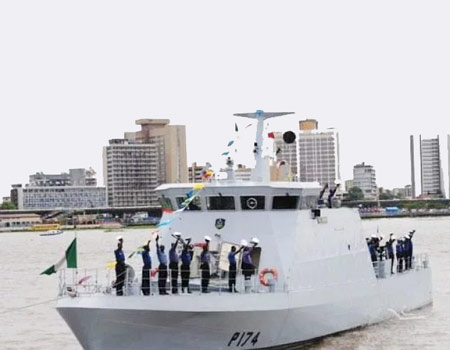 The police in Lagos State have begun investigations into the death of a member of the Presidential Committee on the Probe of Arms Deal, Rear Admiral Daniel Ikoli, who was early Wednesday found dead in his Apapa Lagos home with bullet wounds.

Though the details of the death were yet to be unravelled. There were concerns that the deceased naval boss might have been assassinated.

There were also reports that the deceased Ikoli might have locked himself up in his apartment and shot himself.

Policemen from Area B police station said that the deceased naval officer’s lifeless body was found in a locked room in the apartment.

A source in the Nigerian Navy, who spoke with the Tribune Metro described the deceases naval boss as a very ‘nice officer’.

A police source at Area B, who spoke with the Metro under the conditions of anonymity said “anything is possible. Murder can be stage-managed but with what we saw, he killed himself.”

It was gathered that Ikoli stayed alone in the apartment as his wife stayed in Abuja, while his children were said to be schooling overseas.

It was gathered that the late Ikoli was taken home on Tuesday afternoon by his naval assistant, after he complained of not feeling well.

There were also reports that the deceased naval officer had in the past complained about his safety as a result of his membership of the presidential committee.

An aide of the late Ikoli, who was with him at home but in another room also told the police that he heard gunshots but did not know, who actually pulled the trigger.

The boy told the police that he was scared, when he heard the gunshot and that he took cover for fear of being killed.

The spokesperson of the command Lieutenant Commander Chinwe Umar confirmed the death to newsmen and added that investigations were ongoing.

Lt Com Umar said “in the early hours of this morning, Wednesday 5 April 2017 gunshots were heard in the vicinity of where Rear Admiral Tekumo Daniel Ikoli resides in Apapa. When his room was opened, he was found dead.

The naval spokesperson added that “police has been invited and investigation is ongoing .When the situation is clearer, an update will be given.”