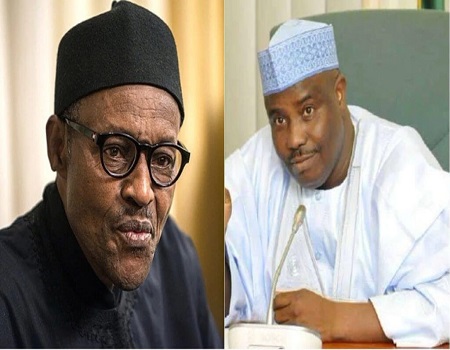 The Presidency has scheduled a meeting between President Muhammad Buhari and Sokoto State governor, Aminu Waziri Tambuwal in the aftermath of the Wednesday night dastardly killings of innocent people in the South-Eastern part of the state.

This is as Governor Tambuwal, who paid a condolence visit along with the Sultan of Sokoto, Muhammad Sa’ad Abubakar to the area, directed Sokoto State Emergency Management Agency (SEMA) to visit the areas affected by the attack and make provisions for relief to those affected.

Tambuwal told the monarchs of the area and other stakeholders that: “as we speak, between yesterday and today, I had contact with the Presidency and I have secured an invitation to meet with Mr President anytime soon.”

“God willing, I will be meeting with him to discuss the issues of banditry and insecurity, particularly as they affect the South-Eastern part of our state in order to ensure that all that is required in terms of men and resources are mobilised promptly to halt this problem,” the governor stated.

He added that: “I have also directed SEMA to move to the affected areas to assess the extent of the destruction and damages wrought by the bandits with a view to providing succour to those affected.”

While commiserating with the people of the affected area, GovernorTambuwal narrated how the state government attempted, in collaboration with the security agencies, to repel the attack.

“When this incident was occurring I spoke with the General Officer Commanding (GOC) 8th Division of the Nigerian Army in Sokoto as well as the Garrison Commander and other security chiefs.

“They informed me that the troops on the ground in the area were stationed at (unmotorable, undulating terrains of) Burqusuma axis (about an hour’s journey) away from where the attack was going on. However, the troops were quickly redeployed to the attack area to defend the people.

“Before their arrival, some things had happened. Nonetheless, they chased the bandits, who as they fled continued to wreak havoc on helpless communities on their flight path,” Tambuwal explained.

He prayed for the repose of the souls of those killed and cautioned the people of the area, especially the vigilante groups not to take laws into their hands no matter the gravity of the situation.

Tribune Online reports that in his brief remarks, the Sultan of Sokoto expressed worry and sadness over the gory massacre of innocent citizens and prayed for them.

He also admonished the people of the area and the entire state to be more prayerful and ask Allah for protection against all kinds of evil.