President Buhari in Katsina ahead of Sallah festivities 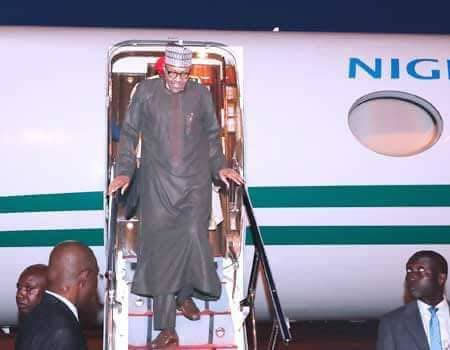 The News Agency of Nigeria (NAN) reports that the Presidential jet conveying Buhari and some of his aides touched down at the airport at about 5.51p.m.

Gov. Aminu Masari of Katsina state, Minister of State, Aviation, Sen. Hadi Sirika and other government officials were among those at the airport to welcome the President.

NAN reports that the President was later conveyed to Daura by a presidential chopper.

Buhari, who returned to Abuja from London on Aug. 18 after his 10-working-day vacation, had earlier met behind closed doors with security chiefs at the presidential villa, Abuja.

The Chief of Defence Staff (CDS) Maj.-Gen. Abayomi Olonisakin, who spoke on the outcome of the meeting, said the president was updated on the security situations across the country.

He said that the meeting focused mainly on the situation in Benue, Zamfara and Taraba States.

He said: “We just had two and a half hour meeting with the President and Commander-in-Chief.

“We reviewed the security situation across the country- in all the geopolitical zones – and of course, we made all our comments; especially the new operations in Benue, Taraba and Operation Sharan Daji in Zamfara.

ALSO READ: Can I enlarge my manhood?

“He directed that we should continue to step up our game to ensure that the nation is safe and people go about their daily activities in a very safe manner,’’

NAN reports that Buhari has been observing Eid-el Kabir at his country home, Daura, in the last three years of his presidency.