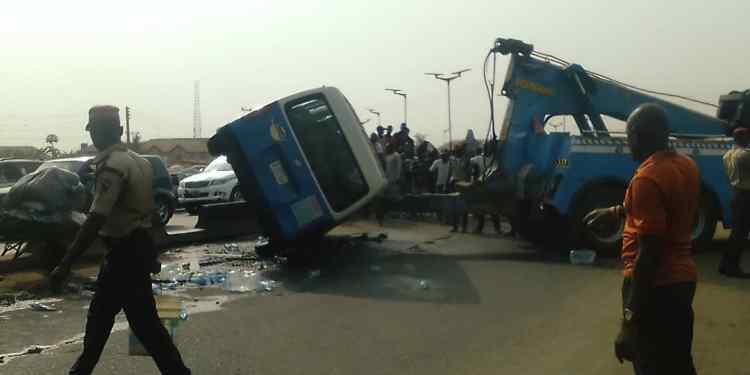 A pregnant woman was, on Saturday, crushed to death in a fatal accident involving a bus at the Coker junction along the Onitsha-Asaba Expressway in Asaba, the Delta State capital.

The bus said to be on top speed reportedly lost control due to sudden brake failure, but occupants of the bus were said to have survived the accident.

The deceased pregnant woman was said to be standing by the road median waiting to cross to Ibuza side of the road when the bus rammed on her.

The busy expressway road is without a pedestrian bridge that could help to avert such tragedy in the area.

The bus with the reg. no. DT273B2B, was said to be headed from the Onitsha side when it ran over the deceased allegedly due to a brake failure.

Witnesses of the tragedy said a man who was standing by the pregnant woman, however, who also wanted to cross escaped death by the whiskers as reportedly jumped over the median to the other side of the road.

Having seen the havoc done, the driver was said to have, for fear of mob action, fled the scene of the accident.

“Aside the brake failure, the driver was also on speed, so it was difficult to avert the situation,” a roadside trader told Tribune Online.

Although no official reaction could be gotten,  officials of the Federal Road Safety Corp (FRSC), were reportedly seen evacuating the bus from the road.

As of the time of filing the report, the identity of the deceased pregnant woman was yet unknown.