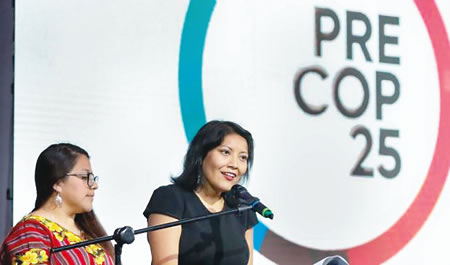 The gathering, from 8 to 10 October, saw more than 1,500 attendees, with delegates representing more than 90 countries and more than 60 parallel events with 264 panelists on topics ranging from blue carbon to electric mobility.

The event put an additional emphasis on climate finance and the gender agenda as transformational focus areas of climate solutions.

“We are honoured to be part of this effort. Climate action is the most important cause of our generation and is therefore worth it. If there is a time to be useful for others, it is now,” said the president of Costa Rica, Carlos Alvarado Quesada, whose country promised to make an unconventional PreCOP.

The gathering provided fresh impetus on the road towards the 25th Conference of the Parties (COP25) of the United Nations Framework Convention on Climate Change (UNFCCC) to be held in Santiago, Chile, this December.

Current national climate action plans under the Paris Agreement put the world on a path towards global warming of 3° Celsius, so ambition needs to be urgently raised.

Ovais Sarmad, deputy executive secretary of the United Nations Framework Convention on Climate Change, said: “It has been hugely encouraging to hear everyone at PreCOP25 talking about the need to raise ambition on climate action.

“Governments and all stakeholders have heard the message of young people to protect their future loud and clear, along with the message of science which states that time is running out and we have only a very narrow window of opportunity to act.

“At COP25 in December, we are looking forward to more governments, and also more cities, regions and businesses announcing action plans that are in line with science and that respond to the calls for increased action.”

Ovais Sarmad commended the progress made to lift ambition, build a bridge from the September UN Climate Summit in New York to COP25 in Chile and then on to COP26 in the UK. He thanked the President of Costa Rica for hosting the meeting and generating positive momentum.

Participants of the PreCOP emphasized the importance of increasing ambition of nationally determined contributions (NDCs) in each country. For that, the three focus areas of the conference are key: nature-based solutions, sustainable cities and the blue economy.

“This PreCOP25 demonstrated that there are ambitious solutions and successful experiences that can guide us towards the 1.5 C goal. We have achieved technical strength and political depth. Nature-based solutions are 30 per cent of the climate solution and Costa Rica has demonstrated in the last three decades that it is possible to grow economically and conserve nature at the same time,” said Costa Rican Minister of Environment and Energy, Carlos Manuel Rodríguez.

Minister Rodríguez stressed that the meeting emphasized the link between the climate change process and the biodiversity process within the United Nations.

Alicia Bárcena, Executive Secretary of the Economic Commission for Latin America and the Caribbean (ECLAC) added: “Costa Rica demonstrates that it is possible to put the economy at the service of environmental protection in a region like ours that has depended on hydrocarbons in the past.”

The meeting allowed the discussion of issues unresolved by the Katowice climate summit regarding the operating guidelines of the Paris Agreement in 2018. Four thematic areas chosen by Costa Rica and of interest for Latin America were discussed:  the acceleration of climate action, Article 6 of the Paris Agreement, the mechanism of loss and damage and linkages between gender and effective climate action.