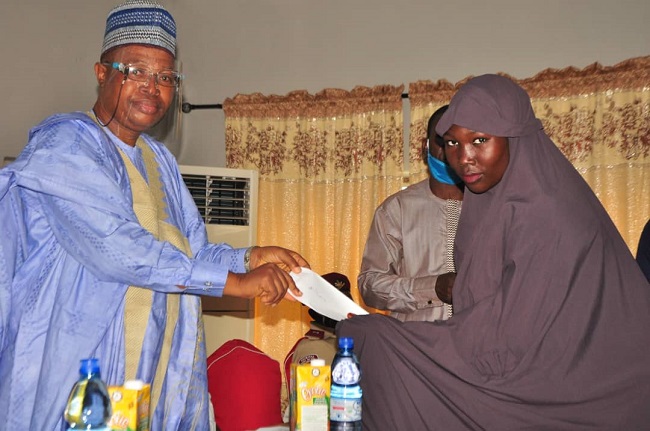 The gesture which was through the minister’s Micro-Enterprise Enhancement Scheme (MEES), aimed at empowering small scale business women and youth.

Speaking during the exercise in Jalingo, the minister, who was represented by his special assistant, Alh. Gambo Karim said the move was part of efforts to ensure the success of the present administration in her target to bring youths of the country out of poverty.

“This gesture is our efforts to assist President Buhari in his target to lift women and youths of the country from poverty.

“We believe the enhancement of many micro-businesses will lead to aggregate economic boom because such small ventures are building blocks of larger businesses and that is why we have confidence in micro-enterprise enhancement scheme because most of them are already business owners”, Gombo on behalf of the minister, expressed.

While commending the National Directorate of Employment (NDE) for their efforts towards reducing unemployment in Taraba, the minister pledge his continuous partnership with the NDE to ensure people of the state continue to enjoy the dividends of democracy.

Earlier, Dr Ladan Argungu, Director General of the NDE who was represented by the Taraba State NDE coordinator, Alh. Aderimi Adebisi noted that the directorate had taken a variety of employment, promotions and poverty reduction activities for the citizenry.

Argungu revealed that lack of access to microcredit with a human face was the major constraint to achieving the directorate goals.

He lamented the situation where most organisations and privileged individuals were not willing to lend to the categories of underprivileged persons, commended the Minister for collaborating with the NDE to disburse empowerment fund to youths of the state.

Miss Doris Yakubu, a beneficiary of the gesture, commended the Minister for the initiative as according to her, the amount given to them was a moral burster to take their businesses to a greater high.

Tribune Online reports that beneficiaries were selected from the 16 local government areas in the state and each is stand to benefit, N10,000.

Victims of flood in Taraba urge govt for assistance

Taraba is in a state of emergency, we need APC to establish a new state- Bwacha