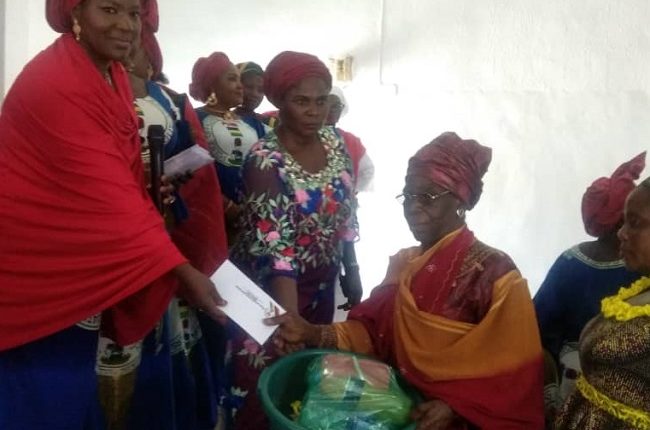 Police Officers Wives Association (POWA) in Kwara State has empowered 50 widows of men and officers of the Nigeria Police whose husbands died in active service in the state command.

Speaking at the empowerment programme, tagged, Widows Empowerment Programme, held on the sideline of Eid-el-Fitr celebration at the Police Officers Mess, Ilorin on Saturday, the POWA chairperson in Kwara state, Hajia Fatimah Bagega, said that majority of widows all over the world struggle to feed or cater for educational needs of their children, among other needs.

The widows were presented with cash and food items.

Hajia Bagega said that prevalent harsh socio-economic situation being experienced by widows could directly or indirectly affect the future of their families, except for Godly intervention.

The POWA chairperson also said that the realization necessitated the association to contribute in her own little way to empower 50 widows, while she promised to continue to improve from where her predecessor stopped.

“I believe the vocational training centre established by POWA will go a long way to train our widows, orphans and less privileged to start small scale businesses. So, by the time they are through with their training, they would have the wherewithal to improve their social and economic standing”, she said.

She appealed to individuals whom God has blessed to always remember the widows in their immediate environment.

Hajia Fatimah Bagega appreciated her husband, who is the Kwara state Commissioner of Police, Alhaji Muhammed Bagega, his management team and all the officers of the state command for their support in the state, saying that, “without them, there will be no POWA in Kwara State.”

Some of the beneficiaries expressed gratitude for the kind gesture and prayed to God to continue to showers his blessings in the lives of the sponsors.

Highlights of the programme are a health talk on diabetics/Menopause, lecture on Micro-Pension scheme, among others.

One of the beneficiaries, who lost her husband in the Offa robbery incident, Mrs Bunmi Oke, called on the government to pay his husband’s entitlements, saying it would go a long way to lift her family, while she also appreciated the people behind the empowerment programme.

Another beneficiary, Mrs Ajubbi Lynda, also expressed her gratitude, calling on the police authorities to as a matter of urgency, expedite action on the death benefits of their late husbands, in order not to allow their service to the fatherland to be in vain.

She also called on the Police to provide jobs for some willing widows at the various police state headquarters to earn a monthly stipend.

In spite of the huge investment in the water sector by the government and international organisations, water scarcity has grown to become a perennial nightmare for residents of Abeokuta, the Ogun State capital. This report x-rays the lives and experiences of residents in getting clean, potable and affordable water amidst the surge of COVID-19 cases in the state…POWA empowers 50 police  POWA empowers 50 police

The Lagos-Ibadan railway was inaugurated recently for a full paid operation by the Nigerian Railway Corporation after about a year of free test-run. Our reporter joined the train to and fro Lagos from Ibadan and tells his experience in this report…POWA empowers 50 police  POWA empowers 50 police