•As 75 benefit from The Companion’s N8m zakat 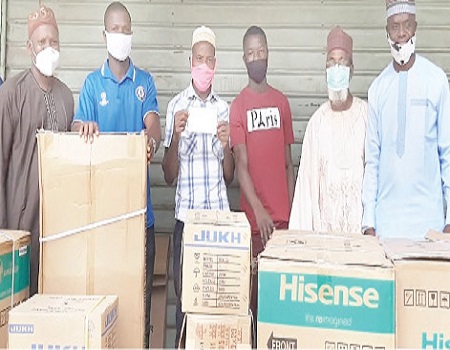 AN Islamic scholar and chief executive officer of Qiblah International Travels and Tours, Alhaji AbdulFatah AbdulMajeed, has ruled out poverty as being one of the signs of piety.

He spoke during the disbursement of zakat proceeds by The Companion, an association of Muslim men in business and the professions, held at the organisation’s Ikeja, Lagos national secretariat.

No fewer than 75 people received cash and materials worth N8 million from The Companion Zakat and Sadaqah Fund.

Abdul Majeed warned that poverty could lead to unbelief in a sufferer.

“This is why our Prophet taught us how to pray against poverty. It is the duty of Muslims to fight against anything that has to do with poverty. Allah also commanded Muslims to seek refuge against it,” he said.

According to him, it is unwise to seek advice from someone who is hungry.

Oyefeso said this would grant them access to the various governments’ intervention funds.

He urged The Companion to organise a seminar on financial literacy for the beneficiaries of zakat.

“We have huge poverty in the country. It can be ameliorated through accessing government’s funds and their judicious use,” he said.

Sonaike, represented by the head of the Zakat and Sadaqah Fund, Alhaji Lai Baruwa, reminded well-to-do Muslims that zakat is meant to purify and increase their wealth.

Sonaike called on government at all levels to create more social welfare programmes for the suffering masses.

Health care services, especially at the primary health care centres, he said, should be free or heavily subsidised.

“Pension should be paid as and when due, education in public schools should be affordable and the agricultural sector (especially food crop production, storage and distribution) should be heavily subsidised in order to make prices of food affordable for the poor.

“The government should do more for the masses, while our political officeholders should give up part of the extravagant lifestyles and humongous remuneration for the release of money for the welfare of the masses. I hasten to remind the government that the security and welfare of the people is their most paramount duty,” he said.

Sonaike said he was happy that the number of zakat contributors this year was higher than the previous years.

He said: “We have been able to increase the number of beneficiaries as well, even though it is less than 50 per cent of the applications we received. This clearly shows that we still have a very long way to go.”

More Shocks As Unemployment Data Exposes Misery Status Of Nigerians
BEFORE now, economic and finance experts found it difficult to assess the healthy nature of the labour market and how to measure the impact of government policies targeted at creating jobs because of lack of real time labour data. But on Friday, August 14, 2020, the concerns were only slightly eased as the National Bureau of Statistics (NBS) published second quarter (Q2):2020 labour statistics, the first report since Q3:2018…Poverty not sign of piety Poverty not sign of piety

MONDAY LINES: Obasanjo’s (D)Art Of Condolence
Ben Guriano of The Washington Post described them in 2018 as ‘taboo enforcers.’ These are trolls seeking to upend truth and subvert facts about the life and times of the dead. ‘Do not speak ill of the dead’ came originally from a Spartan philosopher, then it was latinated by the Romans to read De mortuis nihil nisi bonum – and got spread around the world like Chinese viruses. The black man, as in all cases, contracted the no-no and turned it into a religion, got drunk with it and won’t mind killing for it…Poverty not sign of piety Poverty not sign of piety

2.4 Million Households To Benefit From FG’s Stimulus Package — Presidential Aide
TO ensure food security for citizens, at least 2.4 million households will benefit from the Federal Government’s post-COVID-19 stimulus package, a presidential aide says. Dr Andrew Kwasari, Senior Special Assistant (SSA), to the President on Agriculture, disclosed this in an interview with the News Agency of Nigeria (NAN) on Sunday in Abuja. Kwasari spoke against the backdrop of projects anchored by the Nigerian Economic Sustainability Committee (NESC) to secure the economy against the effects of COVID-19…Poverty not sign of piety Poverty not sign of piety