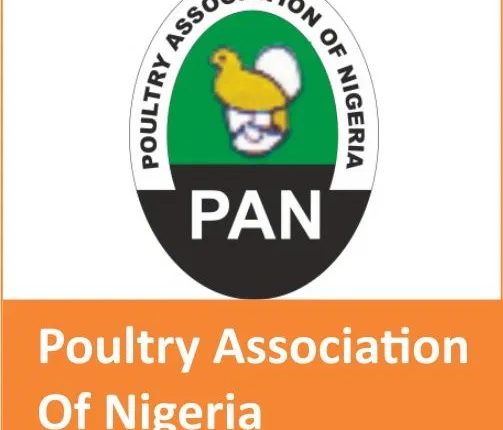 The is part of the request made by PAN during a press conference on the situation on the Nigerian poultry industry and way to sustain the growth and development in the industry.

Speaking at the press conference, the National President of PAN, Mr Ezekiel Mam, commended President Muhammadu Buhari for the approval of 5000 metric tons of maize for poultry farmers.

He said the Poultry industry in Nigeria is a major player in the agricultural value chain as we uptake about 40 per cent of Maize and 60 per cent of Soybeans produced in the country.

“We are also the major off-takers of rice bran, wheat offal, groundnut cake and others and with our continued determination to create awareness and increase the per capita consumption of poultry products of Nigerians by 50 per cent of our current consumption rate, we are set to create a new revolution in the entire agricultural value chains in Nigeria.”

The poultry farmers called for coordinated collaboration, synergy and interfacing among all the stakeholders in the agricultural value chains.

“Develop a reliable data collection method in order to build reliable all agricultural planning and transparent database for investments.

“Increase the percentage and funding to the Ministries of Agriculture at Federal, State and Local Government levels.

PAN further urged the Federal Government to maintain the total ban on the importation of frozen poultry products and ensuring that maximum sanctions and prosecution are meted to violators in order to deter others.

“There should be constant consultation between the various offices of the Government with all the commodity associations to ensure that first hand and undiluted information are brought on board to assist the government to realise its general objectives.

PAN requested that the government School Feeding programme which is a deliberate policy to empower our local farmers should be handled by Commodity Associations rather than giving their supplies to contractors.

“The Poultry Association of Nigeria will most appreciate that all poultry products used in the School Feeding Programme should be purchased from the farmers in the various states through the Association.

“The Security situation most especially in the northern part of the country where grains are largely produced. We will government and all stakeholders to move fast to restore security for farmers as without the farmers’ life will be near impossible for people living in the towns and cities,” PAN added.

COVID-19: Not Yet Uhuru •Will Nigerians’ Indifference Spark Its Second Wave?
The spate of the deadly coronavirus pandemic surged from over three million cases in April to over twenty-six million cases in August. But while it is still increasing in some parts of the world, the infection rate, according to the figure released by authorities daily, is reducing in Nigeria…
Poultry farmers agric investment
Yoruba Summit Group Issues Red Alert On Nigeria
THE regular meeting of the Yoruba Summit Group has ended. It undertook an in-depth review the state of Nigeria in relation to the interests and aspirations of the Yoruba Nation…
Poultry farmers agric investment