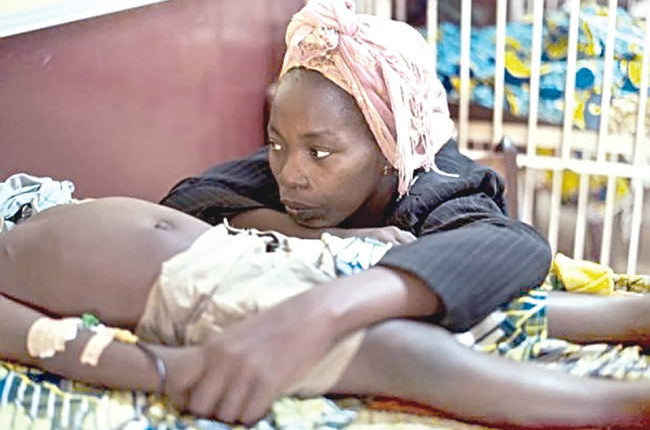 WE have looked after a preterm baby at UCH, Ibadan, before, that went home and we were happy. They brought in the baby dead at five months. They said he had a fever and cough three days ago.  I cannot get over it,” recounted Dr Kemi Tongo, a consultant pediatrician.

For many doctors like Dr Tongo, that babies continue to die for no fault of theirs is heartache. She added:”We put in everything; we sweat our emotions into caring for them because we want to deliver babies that have their maximum potential for growth and development to the families, and then the families will now take these babies home and bring that kind of problem. These are things that we are really worried about.”

Globally, infectious diseases, including pneumonia, diarrhea and malaria, along with preterm birth, birth asphyxia and trauma and congenital anomalies remain the leading causes of death for children under five.

Access to basic lifesaving interventions such as skilled delivery at birth, postnatal care, breastfeeding and adequate nutrition, vaccinations, and treatment for common childhood diseases can save many young lives.

Malnourished children, particularly those with severe acute malnutrition, have a higher risk of death from common childhood illness such as diarrhea, pneumonia, and malaria. Nutrition-related factors contribute to about 45% of deaths in children under five years of age.

According to the World Health Organisation, half of all under 5 deaths in 2019 occurred in just five countries: Nigeria, India, Pakistan, the Democratic Republic of the Congo and Ethiopia. Nigeria and India alone account for almost a third of all deaths.

Now, in a new study experts’ review of care-seeking for children in the North Central and South-West zones of Nigeria found many factors that influence if, when and where families seek sick-child care outside the home.

It also compared findings across states, different illnesses, type of participant, and those who sought biomedical care versus those who visited a chemist administered self-treatment, or visited a traditional healer.

This study, with a focus on pneumonia, malaria and diarrhea, the leading causes of ill health and deaths in Nigerian children was in the May 2020 online edition of the BMC Public Health.

Parents were found to have a general understanding of illness symptoms but did not always attribute illness to biomedical causes. Intra-household decision-making processes were shaped by gender dynamics between men and women, and were found to have great effects on decisions to seek care.

Use of traditional medicine and self-treatment were found to be common first steps in treatment before turning to the biomedical care system. Once the decision to seek biomedical care was taken, the route of seeking care varied between seeking care at chemists and then continuing to health facilities or starting with a health facility and then accessing prescriptions from a chemist.

All the caregivers’ recognised symptoms their child had during their most recent illness and responses from parents were largely consistent across LGAs and care-seeking patterns. Parents were more likely to seek immediate care if the illness was perceived to be severe.

However, many misconceptions still abound on these diseases. Many parents recognised the connection between mosquitos and malaria or fever, but sometimes considered the symptom of fever and the medical diagnosis of malaria as the same. A number of parents believed that spending too much time in the sun could cause fever.

Nearly all parents and a number of primary health centre in-charges interviewed believed pneumonia was caused by being cold or not dressed warmly. Some mothers in Idah LGA attributed pneumonia-like symptoms to certain foods, such as groundnuts.

Although providers and community leaders identified financial barriers to care-seeking, most parents said that financial and geographic barriers did not influence care-seeking.

They reasoned that financial barriers may distract from the cultural barriers that delay care-seeking, such as intra-household decision-making norms or preferences for traditional medicine or self-treatment.

In addition to financial support, participants from Kogi and to a lesser extent in Ebonyi indicated that cultural norms dictate that the child belongs to the father and the mother does not have the right to seek care without permission from the father.

Therefore, the researchers declared that public health programmes that exclusively target mothers of young children risk failure when they do not take into account the complexity of intra-household dynamics.

Also, they suggested addressing this delay in care-seeking requires gender-sensitive programming that engages men and community leaders in health education and promotes equitable decision-making.  Seeking permission from a male partner can be a delay in seeking timely care for sick children.

Introducing a community based non-monetary incentive to support male attendance at community information sessions to strengthen their understanding of their role in supporting mothers in recognising and seeking care for sick children is also important.

Problem of ASUU and the way forward