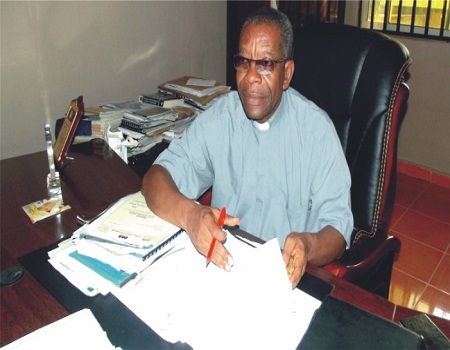 The Rector, Imo  Polytechnic, Umuagwo, Dr Wenceslaus Madu, on Thursday recommended bilingualism as a way of reducing the present high rate of unemployment in the country.

Madu made the recommendation during the unveiling of the Missionary Institute of God’s Image (MIGI) Language Institute, a German language school, in Amurie-Omanze, Isu Local Government Area of Imo.

The Catholic priest, represented by the polytechnic’s Director, Consultancy and Entrepreneurship, Dr Donald Mbama, said that the institute, affiliated with the Polytechnic, would improve students’ employability after graduation.

According to him,  the institute built by the Missionary Sisters of the Divine Image, a congregation of Catholic reverend sisters, will afford students the opportunity of learning an additional international language.

He said students of the institution on graduation would be able to get jobs outside the shores of the land since they could speak German.

“We have a very strong affiliation with the MIGI language institute, a partnership that will enable our students to be bilingual and employable beyond the shores of Nigeria when they graduate.

“We will do this by attaching the German language to our school of general studies provided it will be accepted by the regulatory bodies that control our behaviour at the Polytechnic,” he said.

Also speaking, the Foundress of the institute, Vivian Ozurumba, a reverend sister, said that the effort was part of her congregation’s humanitarian activities while advising the public to take advantage of the opportunity.

“We have over 60 students at present and we intend to expand by starting up an evening programme for language learning at Imo Poly so that the working class can likewise benefit.

“We have successfully trained students in Ghana and Germany and we believe that we can replicate the effort on home soil,” she enthused.

Oil wells on fire in Ondo, as Chevron responds, mobilises to site

Unemployment: CIPM to collaborate with institutions towards closing skills gap