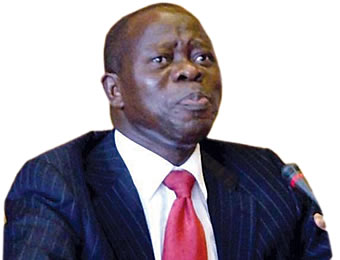 THE political crisis in the Edo State All Progressives Congress (APC) ahead of 2020 governorship election took a turn for the worse at the weekend in the Edo State capital of Benin when some suspected hoodlums attacked the residence of the National Chairman of the party, Comrade Adams Oshiomhole.

In a reprisal attack, the Chief of Staff to Obaseki, Taiwo Akerele alleged that he was attacked by a chieftain of the APC in Protea Hotel during a meeting with some foreign investors.

But the Commissioner of Police, Danmallam Muhammed said there was no such incident in the ruling party national neighbourhood.

The suspected hoodlums had reportedly gathered around the residence of Oshiomhole and were chanting ofensive slogans apparently waiting for him to come out of the house and go in from where he was coming from.

In the melee, they were said to have been dispersed by security operatives and the road closed to traffic some times before it was re-opened.

Security was beefed up at Oshiomhole’s house, about four police patrol vans had been brought in addition to the one that was always stationed in front the of the house.

According to the Chief Press Secretary to Oshiomhole, Mr Simon Ebegbulem fingered a top government official who he insisted was desperate to get a second term.

Ebegbulem, however, disclosed that the assault was neutralised by rival APC youths who were dispatched to the national chairman’s residence.

The Special Adviser to Governor Godwin Obaseki on Media and Communication Strategy faulted Ebegbulem, insisting that the allegation against the government was false.

Osagie said he was not aware of any such attack and there was no information to them that Oshiomhole was even in town and that the allegation against Obaseki was false.

Narrating his experience, Akerele said he just arrived from his home town where he also discovered that unknown persons entered his room through the ceiling and their mission not known.

He said he went to the hotel at about 7 pm for a meeting with some foreign investors and that while the meeting was on Kabaka came and first attacked him verbally and was walking towards him when he was restrained by people around.

“And I just came from Igarra where I met that unknown persons entered my room through the ceiling. I have reported to the police in Igarra and when I came to Benin, I went straight to Protrea where I had a meeting with some foreign investors and I experienced the attack” Meanwhile Oshiomhiole while addressing some youths who followed him to his house from the hotel said there was no cause to fear as he only came to Benin to attend a ceremony and rest.

He urged them to ensure there is peace in the country and Edo state. He said “Anything that happens anywhere, they say President so we have to help him, we have to help to secure the whole country and in our state, we must be seen to behave well, if other people are beating drums of war, we will share the powder of peace.

“In moments like this, it is not madness for madness because many of you I see here, in 2007, you were already strong, 2012 during my second term, you were there, 2016, many of you deployed as agents; I used to call you guys our infantry Division who protected our votes even when we were in opposition when the federal government was PDP so now that the federal government is APC, we have to take it easy so that there is no breach of peace anywhere in Nigeria and particularly in our state. Those people who are looking for trouble, they are like a small mushroom; if you go and take a stick to destroy a mushroom, do you need a stick to do that? How far can a snail travel? If a snail is running, what s the maximum speed of a snail? Are you going to join running after snail?

“I was contesting in 2012, two men wore red went round town saying I will not get my second term, that they have declared war on me I called our women and said go and out on white; the red they wore is their blood, the white is our peace from that position till today by the Special Grace of God I am what I am. What God has willed no man can change it.

“I am very very happy, there is no one road that I did in this great city that have been washed away; drive on Akpakava, drive on Upper Siluko, drive on “and East, Airport road, Five Junction and other roads; the power of the truth cannot be buried by the combined weapon of the most potent armed forces in the world, the truth is more powerful than the most potent army.”