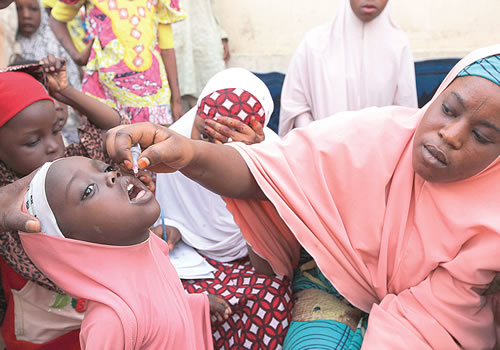 Not less than 43,625 children have been successfully immunised in Bodinga local government area of Sokoto as at Sunday by the officials of the Polio immunization agency in the state.

Bodinga, one of the ten local governments where the polio vaccine immunisations is currently taking place in the state has a target 66,873 children to be immunized in the five days exercise.

He further confirmed that the team initially faced some challenges in terms of non-compliance by some parents in the local government, which he said has been resolved with the cooperation of elders in the affected area.

He appealed to the people of the state especially that of Bodinga local government to take the polio vaccines serious and very essential, saying, the type of drugs administered on the children can not be easily gotten or purchased in any pharmaceutical or chemist shop.

Also speaking, the Director Primary Health Care, Bodinga local government, Shuaibu Sahabi Sifawa, confirmed that the exercise is going on according to plan.

He further disclosed that the exercise so far in all the wards in the local government has recorded 43,625 immunised children out of the target of 66,873 leaving a balance of 23,248 to be covered.

He also revealed that not less than 73,560 doses of the vaccines were received by the local government out of which 46,420 of the doses were used at the time of writing this report.

The Director is however optimistic that going by the records and response he got from the field, the local government will eventually record nothing less than ninety per cent success at the end of the exercise.

Nigeria to be 24 months free of polio in August – WHO