SUBAIR MOHAMMED writes on the tense situation in Mushin, a Lagos community, known for its unique brand of violence.

THE Lagos State police command has said that it is not aware of any threat to public peace in Mushin, Mushin Local Government Area of Lagos State, even as ruling families resumed agitations over the Olu of Mushin stool currently occupied by Oba Fatai Aiyeleru.

Spokesman of the police in the state, Mr Adekunle Ajisebutu, in a short statement to Saturday Tribune, denied any knowledge of rumblings among the five ruling houses in the town.

“Not to my knowledge except I will have to find out. I am not aware of any crisis brewing over the royal stool in the Mushin Local Government. Sometimes if I cannot react to a story, it is because I may not be privy to it. You can as well call the Commissioner of Police. Either of us can react,” he said.

But three of the ruling houses are calling on the state government to quickly wade into the brewing crisis among the royal families to forestall a breakdown of law and order in the area.

The ruling houses of Ajose, Osu-Olowu and Asesewon are also asking Governor Babajide Sanwo-Olu to avert impending communal crisis in the district by ensuring justice for those allegedly being oppressed over their claims to the stool.

The crisis, according to the spokesman for the three families, Alhaji Saola Idowu Fatai from the Osu-Olowu royal family, has raged for the past 46 years and will not go away until justice is done.

According to him, the declaration of 1975 was aided by then military administration in Lagos State and the chairman, Mushin Town council chieftaincy committee to exclude his ruling house and the two other houses from the royal stool.

Made under Section 4 of the Chiefs Law (Cap.19) of the Revised Laws of Western Nigeria, 1959 and adopted by the executive council of the Lagos State government under Edict No. 2 of 1968 of the customary law regulating the selection to the Olu of Mushin stool, the declaration ceded the right to the chieftaincy stool to two ruling houses.

The three-page document, which identifies and spells out order of rotation between the two ruling houses and the method of nomination by each ruling house, as sighted by Saturday Tribune, was signed by the secretary to the military government in Lagos State, the town clerk and chairman, chieftaincy committee in Mushin.

According to the document, no consent of any other person is required in the appointment of candidate by the kingmakers while the right to the stool is restricted to Odu Abore and Aiyeleru, excluding Ajose, Osu-Olowu and Asesewon ruling houses.

While urging Governor Sanwo-Olu to intervene in the feud and abrogate the declaration, Fatai alleged that the Aiyeleru family, which produced the reigning Olu of Mushin, Oba Fatai Aiyeleru, collaborated with the Odu Abore family to obtain the declaration which Oba Aiyeleru was a signatory to.

Speaking on the grouse of the contending families, Fatai said there had been cases of intimidation, threat to life and peace of mind directed at members of the excluded ruling houses for demanding justice and exposing the injustice meted out to them.

“It is a fact that Mushin Ojuwoye is a communal land and not a stool land. No crown was brought by our forefathers and this has been established by numerous courts since 1918. Our grouse is largely hinged on the fact that both Aiyeleru and Odu Abore families obtained a declaration in 1975 which the present Oba Fatai Aiyeleru appends his signature to, denying our families the right to ascend to the throne or participate in the community’s administration.

“We have been living with the injustice since 46 years ago because we have no evidence to support our claims to the throne. Our patriarch in the Osu-Olowu royal family died in 1972 and the declaration was made in 1975. What does this tell us? It shows that the plan to exclude the Osu-Olowu and two other families was hatched three years after the death of our father.

“We have been patiently living with the unjust act of exclusion. It was only recently that we got to know about our exclusion from the stool when we visited the Lagos State Ministry of Chieftaincy Affairs to obtain the declaration. And when we got the Certified True Copy of the declaration, we demanded all the rights and privileges which we have been denied, including the recognition of our right to the stool, from Oba Fatai Aiyeleru.

“All he did was to offer us the sum of N5,000 through Alhaji Saidi Osu-Olowu as replacement for our rights. We rejected the offer and that was the beginning of what has degenerated into harassment, public assault and threat to our lives. This was in mid-1980s.

“Oba Aiyeleru did not do anything to assuage our distress and restore our rights. Consequently, we dragged him to court in 2005 to reclaim our rights and other privileges. After years of trial, on the 2nd of October, 2018, Justice A.J. Bashua of the Lagos High Court delivered judgment in our favour.

“The judgment exempted Oba Aiyeleru from collecting rent and dues or lease or sublet land within the community either by himself or his agents. The court sanctioned the monarch administratively. Justice Bashua also ruled that the monarch should form a committee comprising each member of the five ruling houses that have right to the chieftaincy stool.

“He was also ordered to render an account of his stewardship from 1979 to date. But he did not adhere to any of these rulings.

“Additionally, the judge ruled that Ojuwoye is a communal land and that nobody, not even the king, has the right to impose levy or collect rent from any tenant.

“A man identified as Akeem, alias ‘no case’, who is also a member of the family, attacked us with broken bottles and weapons and handed down threats against us.

“In the heat of this development, we reported the assault at the Olosan Police Station but the case was turned and we returned home broken. Some minutes after we got home, I heard footsteps and noise of people scampering to safety and there was Akeem and his gang beating and chasing innocent people with broken bottles, machetes and weapons. They cried for help but nobody came.

“Out of helplessness, we wrote a petition to the SCID, Alagbon. They were invited but nothing has been done till date.” 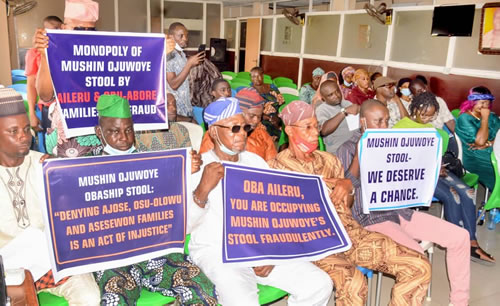 We were attacked –Traditional ruler’s cousin

Contrary to the allegation of harassment and threat to their lives by the three contending families, a cousin to Oba Aiyeleru, Mr Yahaya Aiyeleru, claimed the excluded families were the real aggressors.

He spoke with Saturday Tribune at the palace of Oba Aiyeleru when our correspondent went to seek the traditional ruler’s view on the issue.

Mr Yahaya Aiyeleru said the traditional ruler would not be able to attend to Saturday Tribune’s enquiries because he was observing his siesta.

Mr Yahaya Aiyeleru said the king had been the subject of attack, alleging that those on the other side had been using the police to torment the traditional ruler.

“The contending families had a court judgment in their favour and I think they have that to their advantage. But it is surprising why they are alleging that the king is after their lives whereas they are the ones using the SCID to harass us.

“We have appealed the judgment but we are yet to be given a date by the court. So, I will advise you to either visit the town’s secretary or go to the other ruling house. But as regards the king, you cannot see him because he is having his rest.”

Saturday Tribune hit the road in search of the town’s secretary, Mr Shakiru Adogan, whose house, according to description, is located on Oyo Street, also in Mushin.

At the address given is a hotel where a woman believed to be his wife attended to our correspondent. She said her husband was not home. “He left some minutes ago. Could you drop your name and phone number so that he could call you when he returns?” she stated. The request was obliged but Mr Adogan was yet to revert as of the time of filing this report.

However, reacting to the harassment which was allegedly reported at the Force Criminal Investigation and Intelligence Department (FCIID), Alagbon, Ikoyi, spokesman of the intelligence agency, Niyi Ogundeyi, said he was not privy to such a case.

Ogundeyi said: “When specifically did they report the case? If they truly reported as they claimed, I will need to find out. We have several sections here and I wouldn’t know which of the sections they reported to hence it has not been brought to my notice.

“Secondly, issues like chieftaincy and obaship tussles are not criminal in nature; they are civil in nature and, therefore, if a petition involving civil matters are sent to FCIID, we direct petitioners to seek civil redress in the court of law. Maybe that has been done, I wouldn’t know. But if you can avail me necessary information about the section where the petition was filed and I would get back to you.

“So get the section where the petition was submitted, the date it was submitted and the IPO the matter was assigned to and I will give you a feedback on your enquiries.”

Last week, members of the families of the three affected families of Ajose, Osu-Olowu and Asesewon assembled at a press conference in Ikeja to press home their demands.

Represented by Chief Nojeem Asesewon, Mr Mukaila Adio Ajose, Alfa Fatai Idowu, Alhaja Saamota Ariyibi and other members of the ruling families, they made a case against the alleged omission of their ruling houses from the declaration and the alleged denial of their rights to the throne.

“There were five families that had the right to the obaship stool but in 1975, three of these families were excluded from the right to the throne. The affected families cried out but their cries were not heard because there was no sufficient evidence to support their claims.

“Some months ago, these families approached the Lagos State Ministry of Chieftaincy Affairs where they got the document to support their claims.

“According to the document, only two royal families have the right to the Olu of Mushin stool. The question remains: what becomes of the other three families?

“We are urging Mr Governor to look into this injustice and declare the 1975 declaration null and void. He should do the needful and ensure that the families are included.

“The sitting Oba Fatai Aiyeleru was a signatory to the declaration which implies that the exclusion of the three royal families was done deliberately.

“We are appealing to Governor Sanwo-Olu to revisit the declaration and restore the right of the families to the royal stool.”

Why Lagos danfo drivers, others will pay more than N292,000 each per annum