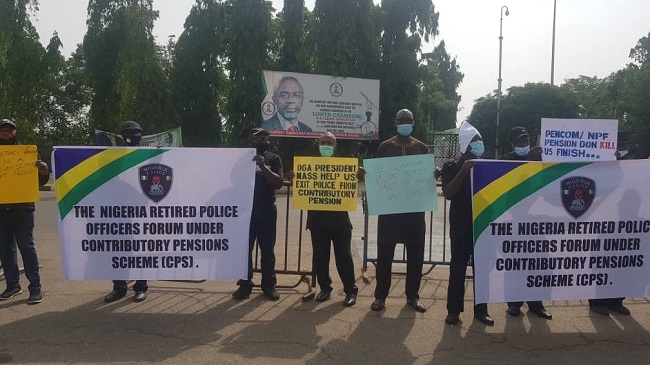 Retired policemen under the Contributory Pension Scheme are calling on the national assembly to amend the Pension Act to reflect the Police, as its Military and Department of State Security counterpart.

Their argument was that the debarment allowance which their counterparts in the military enjoy has been denied members of the Nigerian Police who know about internal security.

Spokesman of the group and legal Adviser, Elder Ofem Nbang who led the group to the national assembly said read out the group’s petition to both the President of the Senate, Ahmad Lawan, and the Speaker, House of Representatives, Femi Gbajabiamila.

He said, “When they introduced the Contributory pensions Scheme in 2004 we were under the old Pensions scheme (benefit) the law was made to be retrogressive.

This was after many of them have put in a minimum of 33 years while the least at the time was about 23 years in service.

“This is against the provision of Section 173(2) of the Constitution of the Federal Republic of Nigeria 1999 (as amended) because it alters an existing pension scheme( benefit scheme) to the disadvantage of prospective retirees who have been in service long before the enactment of the Pension Reform Act 2004.”

“Laws are made to take effect from when they are made and thereafter but they made a law to take care of our retirement benefits while we were already twenty-something years in service which has subjected us to suffering today.

“For instance, I retired as Deputy Superintendent of Police after 35 years. I was paid what they called lump sum, retirement benefit of N1741, 000 and I am placed on N40,000 pension and that is why many Police officers retire, and within one month when they hear of what we are passing through, they die of hypertension.

“The major issue that made them exempt the military, we are also suffering from it, morality rate, work hazards, and protection of the territorial integrity of this nation.

“It may be argued that the non-exemption of the Nigeria Police from the Contributory Pension Scheme was the decision of the then IGP Ibrahim Kpotun Idris (rtd).

“The decision was not borne out of patriotism nor the interest of the retired Police Officers, but the then IGP was overwhelmed by the guaranteed position of the Chairmanship of Board of Directors of the NPF Pensions and other interests. “He sacrificed the interest of Police retirees and serving officers and that of their families for his personal gains.

“The teleguided representation was selfish and borne out of the fact that the retired IGPs have succeeded to constitute themselves into rotational Chairmen of Board of Directors of the NPF Pensions Limited.

“Their rotational directorship of the NPF Pensions Limited is extremely detrimental to fair dealing with Police retirees and management of the fund. Our grievances are based on some of the following reasons”

“The reason being that they are well trained and sophisticated handling in security matter, including Police we are doing the same work, including ballistic, Explosive operation department, intelligence department.

“All those things, the military were settled because they know if they are not settled they may be exposed for some other person to use them against the security of this nation, we should also be beneficiary to these things.”

The group was which was civil in her protest was asked to present her report to the Sergeant-at-Arms who would report to the national assembly commission.