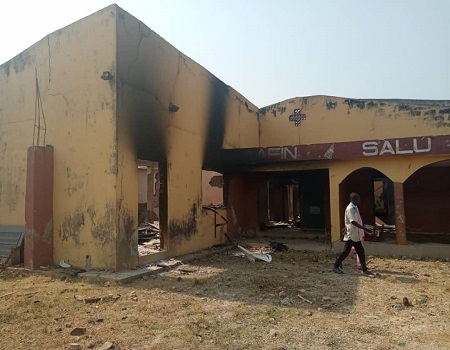 AUTHORITIES of the Osun State Police command have restored normalcy after some enraged youths torched the palace of Salu of Edunabon community in  Ife North West Local Council Development area of Osun State on Wednesday.

Speaking to journalists over the incident, the Police Public Relations Officer (PPRO) of Osun State Police command, Mrs Folasade Odoro said law and order have been restored in the troubled community.

Odoro, who said she could not give the exact figure of number of suspects arrested in connection with the alleged arson urged the inhabitants of the community to go about their social and economic activities, assuring that the Police were on top of the situation.

It is recalled that trouble ensued in the rustic community when a prince, identified as Kehinde Oladepo, who just finished observing traditional rites in seclusion as a precondition for becoming an Oba attempted to gain entry into the palace, thus culminating into severe injuries sustained by some people.

According to a source, some enraged youths, who were said to be against his emergence as the monarch of the community stormed the palace and burn it down, with a view to preventing him from ascending the vacant throne.

However, findings by the Nigerian Tribune indicated that tension had built up in the community since late last week as two individuals, namely Prince Kehinde Oladepo and Prince Nasiru Adebayo laid claim to the throne.

Sources informed our correspondent that Prince Nasiru Adebayo stormed Edunabon last Friday amid funfair and went to Adeyemi and Bolu compounds according to their tradition, then later proceeded to seclusion, which was perceived in some quarters as a direct affront to Prince Kehinde Oladepo, who had hitherto commenced seclusion rites.

These developments followed the demise of the immediate past Salu of Edunabon, Oba Elijah Omoloye Oyelade, Agunbiade I, who joined his ancestors on August 4, 2017.

2019: Most political parties registered by INEC are trading centres ― Oshiomhole