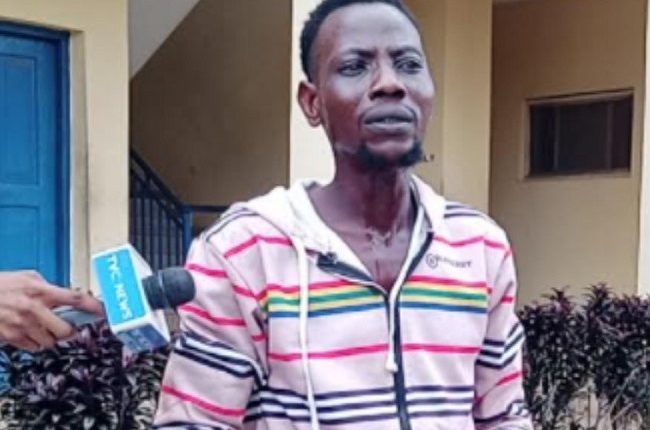 A 40-year-old ritualist identified as Kabiru Oyeduntan is now being quizzed by the Osun State police command for butchering the body of a 20-year-old lady into pieces in Apomu of Isokan local government area of the state.

While parading the evil perpetrator on Friday, the state police commissioner, CP Wale Olokode said, “the suspect was arrested based on a tip-off from members of the public, adding that crime would be reduced to the barest minimum with the cooperation of the public.

He urged members of the public to continue to cooperate with the police in fighting crimes and criminality.

He however hinted that when the Police operatives stormed the criminal abode, the head, wrist and other parts of the severed body was found inside a box in one of the rooms of the suspect and that, in no distance time, the suspected ritualist will be charged to court after the completion of investigations.

Meanwhile, the killed Lady said to have slept in her boyfriend house, who is the prime suspect in the case.

In his confessional statement, Oyeduntain, said, “the lady was killed for the purpose of using her for money ritual by his friend simply identified as Akin (O’clumsy) Alupaida.”

He further revealed that, one of them identified as Akin perpetrated the act and hinted that, he had run away with some severed parts of the victim having realised that he (Oyeduntan) had been arrested by the police.

“It was my friend that brought the lady to my place from Ibadan. But he already told me that he wanted to do a money ritual. He sought my assistance and promised to give me N50,000 which I agreed.”

“When he was having sexual intercourse with her, I assisted him to hold her two legs and he then strangulated her to death.

“Akin was the one who dismembered the lady’s body. He removed heart, private parts and took them away.” Oyeduntan submitted.

In spite of the huge investment in the water sector by the government and international organisations, water scarcity has grown to become a perennial nightmare for residents of Abeokuta, the Ogun State capital. This report x-rays the lives and experiences of residents in getting clean, potable and affordable water amidst the surge of COVID-19 cases in the state…Police quiz ritualist  Police quiz ritualist

The Lagos-Ibadan railway was inaugurated recently for a full paid operation by the Nigerian Railway Corporation after about a year of free test-run. Our reporter joined the train to and fro Lagos from Ibadan and tells his experience in this report…Police quiz ritualist  Police quiz ritualist