As command clamps down on Sara Suka thugs 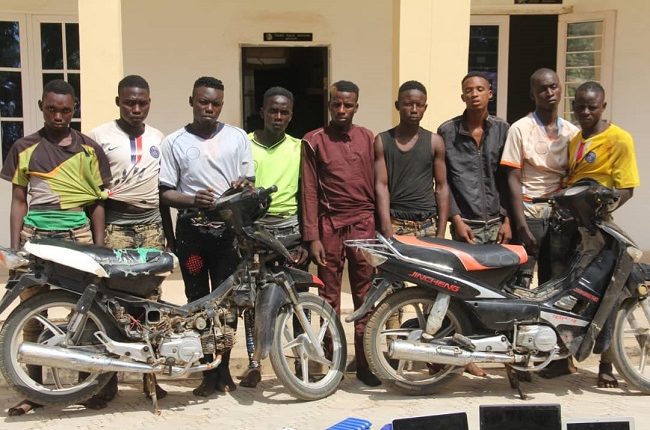 9 suspects have been arrested by the Bauchi State Police Command for Armed Robbery.

A press release by the PPRO, DSP Ahmed Wakili contained that on 18/11/2020 at about 0136hrs information received was from Gudum Hausawa villagers that a gang of Armed Robbers stormed the settlement and the I.D.C in Zango area of Bauchi on a mob operation act.

The PPRO wrote that On receipt of the information, the DPO ‘D’ Division led a team of patrol and swung into action, in the process Nine suspects were.

The release contained that While other suspects escaped to unknown destination, effort is on top gear to apprehend the fleeing suspects.

Also, On the 14/11/2020 at about 1313hrs information was received from reliable sources that, some hoodlums numbering about 20 went and attacked office of committee security members (‘Yan Committee) located at Kofar Dumi Bauchi and burn their Hilux Van, while six of the security committee members sustained various degree of injuries and were rushed to Bauchi State Specialist Hospital for treatment.

On receipt of the complaint, the CP, Lawan Tanko Jimeta charged the tactical team of the Command to arrest perpetrators and the team led by Commander of RSS swung into action, carried out series of raids at criminal hideouts within the metropolis, flashpoints and black sports.

In the process, it Arrested 20 suspects in connection to the crime including ;
Mubarak Hashim of Karofi; Umar Ibrahim (AKA) Dan Kwaram;
Khalid Ibrahim of unguwan Bauchi;
Yahaya Ibrahim of Unguwan Bauchi and
Mohammed Sani (AKA) Mai Laya of Kofar Dumi.

Others arrested are; Abdulmajeed Muktar (AKA) Dila of Saman karofi;
Abubakar Dahiru of Augunwan Gado Bauchi; Mustapha Muhammed (AKA) Maidala of Sabuwar Kasuwa and
Suleiman Suleiman (AKA) Babaji of Kasuwar Fada.

The PPRO wrote that All suspects mentioned above will be profiled and charged to court immediately.

The Commissioner of Police, Lawan Tanko Jimeta vowed to stem the state of hoodlums who foment troubles and threaten peace and security of public.

The Command emphasize that safety and security is not only the sole responsibility of security agencies alone, urging members of the public to play a vital role towards ensuring peace by availing the Police with useful information that will be instrumental to unbundling criminal acts and tendencies.

Controversial Catholic priest and Spiritual Director of Adoration Ministry, Enugu, Nigeria, (AMEN), Rev Fr Ejike Mbaka, has taken a swipe at President Muhammadu Buhari and past leaders of the country demanding that the President should apologize to the country, especially the youth, on behalf of himself and his predecessors, for causing Nigerians so much pain…Police parade suspected robbers  Police parade suspected robbers

Tinubu has paid his dues, I won’t join others to pull him down ― Fayose