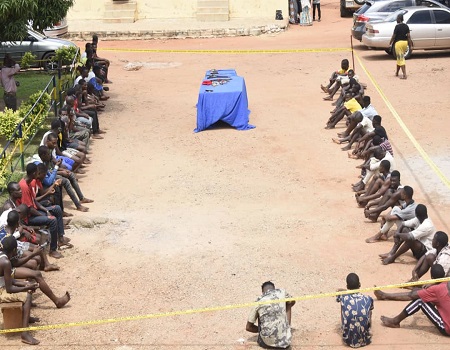 Police in Benue State have arrested a total of 87 criminal suspects across the state.

The State Commissioner of Police, Mukkadas Garuba, who paraded the criminals said that they were arrested across the state.

He gave the breakdown of the criminals to include; 45 suspected cultists, 38 suspects armed robbers and four were suspected kidnappers.

The CP said that 15 arms and 20 ammunition were recovered from the criminals.

The police boss said that a suspected rapist who raped his seven years old daughter was arrested.

The Police boss who commended the people of the state for being law-abiding and very supportive to the police promised that the command will continue to work tirelessly with useful Information and available resources to ensure a peaceful environment.

Another alleged blasphemy leads to burning of shops, injuries in Bauchi