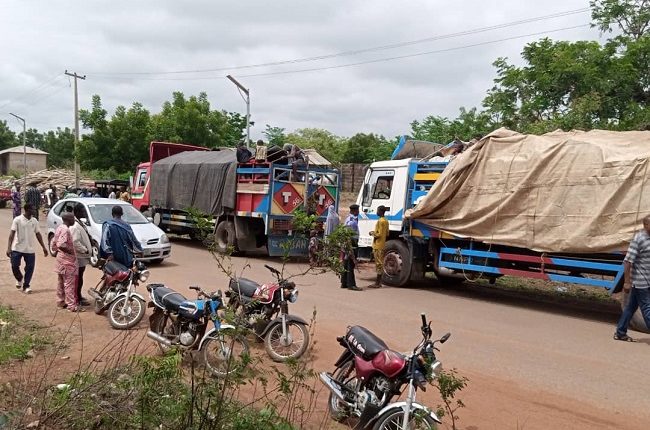 The Nigerian Security and Civil Defence Corps (NSCDC) and the Nigeria Police in Kwara State, on Tuesday, intercepted and sent four truckloads of Fulani/Bororo herders and their cattle away from the state.

It was also gathered that the combined efforts of the men of the NSCDC and the Police in the state had led to the return of the herders, who were relocating from Ondo and Osun states, back to their base.

In a report given by the NSCDC Divisional Officer in Oyun local government, Henry Bilesanmi, the Police led the herders out of the state with their patrol vans.

“NSCDC AND NPF IN IPEE SEND FULANI BORORO BACK TO BASE. At about 08:00hrs of today, Tuesday, 4th May 2021, four (4) trucks fully loaded with Fulani/Bororo herdsmen entered Ipee township but unfortunately for them, people of Ipee and all the local vigilantes came out en mass to disallow them from entering the town with the help NSCDC officers in Ipee and the NPF who led them out with their patrol van.

Also, the Public Relations Officer of the NSCDC, Babawale Zaid Afolabi, said that the command received information that herders from Osun and Ondo states had been moving into the Ipee town which shares a boundary with Offa local government area.

“These herders were denied by Ondo and Osun states due to the criminal activities being carried out by the group. We also identified that herders came into the boundary loaded with four trailers alongside the cattle who wanted to settle in Offa.

“On this note, security agencies in Offa intercepted and led them out towards boundary between Osun and Kwara state.

“We advise the towns that border with Offa be proactive and promptly raise alarm wherever they notice or suspect any strange movement.

“They should be security conscious about bandits and also notify people around them and report to security agencies nearest to them.”

FULL TEXT: A viral post on WhatsApp is asking N-Power candidates to verify the status of their application and see if they have been shortlisted for the batch C cash grant…Police, NSCDC intercept four truckloads of Fulani, Bororo