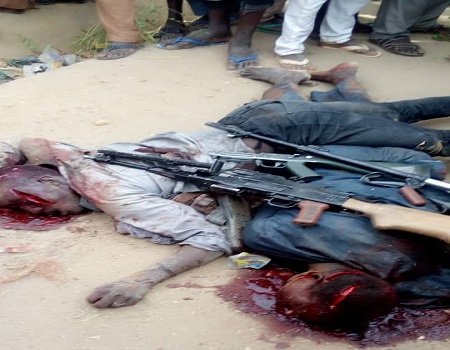 The Nigerian Police, Sokoto State Command on Friday killed two bandits during an exchange of fire between police and the bandits in Sabon Birni.

This is contained in a statement signed by the command public relations officer ASP Muhammad Abubakar Sadiq, and released to journalists in the state on Friday.

According to the statement, “on 22/05/2020 information received from Sabon Birni Police Division reveals that at about 07:45hrs the Divisional Patrol Team while on routine patrol along S/Birni – Garki village sighted two motorcyclists suspected to be armed bandits, whom were pursued and on reaching Garki village their motorcycle hit the pavement of the road and fell down, suddenly subjects opened fire on Patrol Team.

“The Police in conjunction with the vigilantes swiftly responded to the attack, as a result, the two bandits lost their lives.

ALSO READ: COVID-19: 32,000 households to benefit from second round of palliative distribution in Kaduna

“The following items were recovered from the bandits: One RPG with Breech No. M80 and One G3 Rifle with Breech No. 63660, corpses were evacuated to general hospital S/Birni for autopsy, the investigation has commenced in earnest.”

Meanwhile, the state Commissioner of Police Sokoto, CP Ibrahim Sani Ka’oje vows to bring the remnants of the bandits to face the wrath of the law.