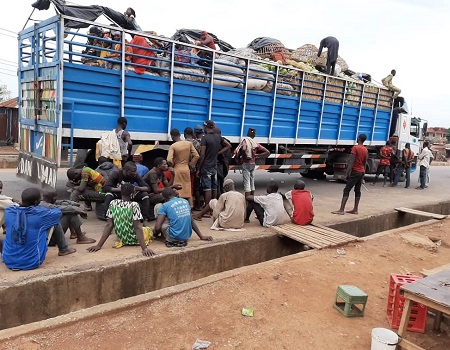 About 50 persons, comprising of women, men and young children trafficked from Zamfara State were, on Sunday morning, intercepted by the Kwara State police command and sent out of the state.

The state police public relations officer (PPRO), Ajayi Okasanmi, via his Twitter handle, said that the people hid beneath a load of fruits inside a truck in an attempt to deceive law enforcement agents.

The PPRO, who said that the efforts were made possible through “actionable intelligence”, added that the people had been sent back to Shinkafi, Zamfara State where they said they were coming from on the directives of the state commissioner of Police, Kayode Egbetokun.

“At about 8:30 am acting on actionable intelligence, men of the Kwara State police command intercepted a trailer loaded with supposed fruits but hidden beneath the fruits were women, men and young children, totalling 50 being trafficked from Shinkafi, Zamfara state to Ogbomoso.

“The state Commissioner of Police, Kayode Egbetokun, has directed that they be escorted back to Kwara State border with Niger State from where they said they came through,” the statement said.

Meanwhile, Kwara State government has imposed a curfew and barred inter-Local Government travels as part of measures to curtail spread of the coronavirus pandemic in the state.

In a statement by the CPS to the governor and spokesperson of the state technical committee on COVID-19, Rafiu Ajakaye, also said the government has discharged yet another six COVID-19 patients who have twice tested negative — two weeks after it discharged two former patients.

With the six patients being discharged, Kwara now has eight active cases of COVID-19.

Regardless, the government warned people against letting down their guards as the level of threat of infection remains high across the country.

“Effective from tomorrow Monday, May 4, there will be statewide curfew between 6 p.m. and 6.a.m. until further notice. This is part of the agreement of the Northern Governors Forum (NGF) to prevent non-essential and unauthorised movement that could spike infection rate,” Rafiu Ajakaye, spokesman of the Governor and Kwara State Technical Committee on COVID-19, said in a statement on Sunday.

“Also, in addition to the measures earlier announced on Friday, May 1, the government hereby bans travels/movement from one local government to the other. This is especially true of local governments with clear borders.”

The statement said other measures earlier announced remain in force but are subject to constant reviews if the government fears increased threat of transmission in the state.

“We repeat that we are not in any way out of the danger of this pandemic. The government will be as flexible as practicable in the phased reopening of the economy but it will at all-time prioritise the protection of lives. In other words, the level of threats of the virus will determine the government’s response from time to time,” the statement said.

“The government directs residents without something specific and urgent to do outside to stay at home. The government also insists that anyone who wants to go out must use a face mask.”