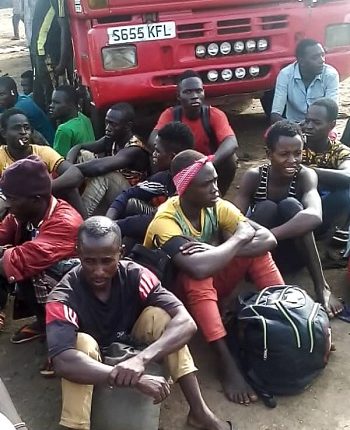 Kwara State police command has intercepted a lorry with registration number, Kaduna MKA 54 XL, conveying about 200 suspected almajiri into the state while 43 other almajiris were intercepted in Cross River and Ondo states.

A statement by the Police Public Relations Officer (PPRO) of the Kwara State command, Ajayi Okasanmi in Ilorin on Saturday said that men of the police command, acting on intelligence report, intercepted a lorry driven by one Shehu Hashim of Manigi in Niger State, on the Kanbi/Oloru axis of Bode Sadu-Okoolowo Expressway on Saturday morning.

During interrogation, the suspects said they were coming from Funtua, Katsina State.

The statement added that the suspected almajirai had been escorted to a border town of Niger State where they would return to Katsina State.

“On interrogation, they were said be coming from Funtua in Katsina State. On the instruction of the Commissioner of Police, Kayode Egbetokun, the lorry and the 200 almajirai youths were escorted by fully armed policemen to the border of Niger and Kwara states from where they will return to Katsina State where they claimed they came from.

The truck intercepted in Cross River State on Saturday was also sent back at the Gakem-Benue border town.

Dr Betta Edu, the chairperson, Cross River COVID-19 Taskforce, told News Agency of Nigeria (NAN), in Calabar that in quick response, she ordered that the almajirai be taken back in the same trucks conveying them.

She said the  trucks were intercepted by the Commissioner for Youths and Skills Acquisitions, Mr Signor Idiege, with a team of security operatives on enforcing the ”No Entry” directive of the government at the border.

She said Idiege also sent an escort to move with the trucks to ensure that they did not divert through any other route back to the state.

“It is important for the Federal Government to support these people where they are rather than allow them move from one part of the country to the other.

“Remember COVID-19 does not move but people move; so, if these people are coming from states that have the virus, of course, for us in Cross River, we do not want them here.

“That is the only way we can reduce the number that is building every day and contain the virus,” she said.

In a related development, Mr Rotimi Adeleye, the sector commander of the FRSC in Ondo told NAN on Saturday that it intercepted a truck conveying 13 young boys from outside the state into Akure, the state capital.

Adeleye said that the patrol team of the corps promptly responded to the clarion call by a sensitive member of the public on the truck.

“Our men intercepted the vehicle at the Federal University of Technology, Akure (FUTA) South gate junction on Saturday morning.

“Today, our patrol team intercepted a truck conveying about 13 male youths from outside the state into Akure,’’ he said.

According to him, the driver of the vehicle claimed he picked the boys on his way from Ibadan, Oyo State.

The sector commander said the Nigeria Police and Ondo State COVID-19 Monitoring Team were invited and the boys were handed over to them.

He said the Police and the state COVID-19 team, promised to lead them out of the state accordingly. (NAN)

Those criticising Makinde over handling of COVID-19 need education —Adisa

Edo indigenes in diaspora celebrate Obaseki’s re-election, say ‘it is…