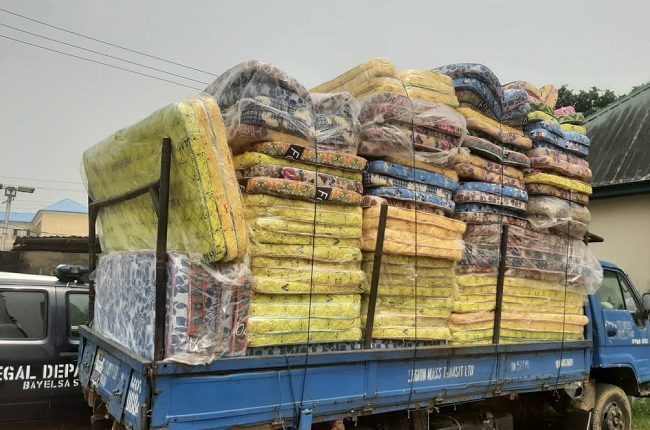 According to a statement by the Police Public Relations Officer(PPRO), Asinim Butswat, the suspects were arrested on the 18th February 2021, at about 10 pm.

Parts of the statement read “Following a tip-off, Operatives of Bayelsa State Police Command have arrested one Shehu Yola ‘m’ 42 years and one Sunday Emmanuel ‘m’ 28 years, at Okaka, Yenagoa.

“The suspects were arrested on 18 February 2021, at about 2100hours, with a truckload of mattresses suspected to be stolen property.

“The Commissioner of Police CP Mike Okoli fsi, has ordered for discreet Investigation to unravel the source of the mattresses.”

The Chairman of Civil Liberty Organization, Bayelsa State Chapter, Chief Nengi James, who raised the alarm that led to the arrest of the suspects commended the Police for quickly swinging into action while appealing that the matter be properly investigated as they are interested in the outcome of the matter.

Chief Nengi said “I want to thank the police and I want to say that this issue should be properly investigated and all those needed to be paraded. We want to see all those that are involved because this is a high level organised crime, so we want to know who the enemies of Bayelsa State are.

“This act is condemnable, and CLO is very interested in the case and that is why we made the information public by informing the people before the police’s reaction. I am calling on IGP to make sure that this matter is not swept under the carpet.”