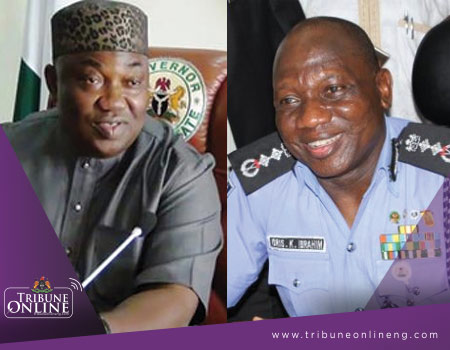 THE Inspector General of Police, Idris Ibrahim on Friday lauded Governor Ifeanyi Ugwuanyi of Enugu State over his efforts in supporting the Nigerian police in improving security of lives and property in the state.

Ibrahim who spoke through the Deputy Inspector General of Police in charge of the South Eastern Region, Valentine Ntomchukwu, who was at the Government House, Enugu on courtesy visit, described Enugu as a peaceful state.

The Police boss told the governor that he was in Enugu state on a familiarization visit, to strengthen its community policing initiatives and to review the operational strategies of the Nigerian police as well as to identify the challenges confronting the force with a view to proffering solutions to solving them in order to further reduce crime and criminality in all the states in the region.

“Your Excellency, from your pedigree and from what I have been reading about you, we are impressed.  We are equally optimistic that you will continue to support the state police command and by extension, the police high command,” the DIG said.

In his response, Governor Ugwuanyi commended the Inspector General of Police, Mr. Ibrahim, for the initiative, which he said “clearly underscores the commitment of the Police to enhance peace and security in the region and the country in general.”

Ugwuanyi noted the importance of security for the stability, growth and development of the society, stressing that “Without it, engagement in meaningful social, political and economic activities, will be virtually impossible.”

The governor further said, “Enugu State is regarded as one of the safest and peaceful States in Nigeria and this is a result of the strategic and exemplary partnership that the state government has maintained with security agencies in the State as well as other initiatives designed to involve the citizenry in security efforts.”

“It is certainly in our interest that this happy state of affairs is sustained and that crime and criminality are reduced to the barest minimum in Enugu State. We therefore whole heartedly, welcome the current measures embarked by the Nigerian Police to achieve this objective and we reassure you of our usual support and cooperation towards that end,” he added.