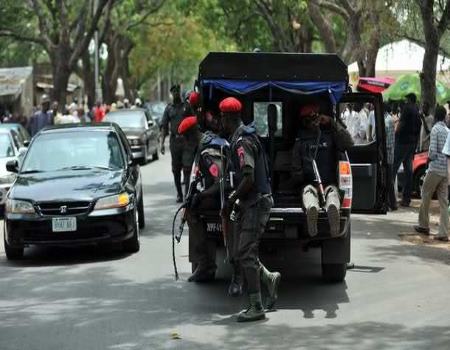 THE Police Command in Cross River has arrested one Inyang Akwanyene and Ibah Edet for allegedly raping and videotaping a 23-year-old lady at a guest house in Calabar.

Presenting the suspects alongside 45 other suspects to newsmen on Friday in Calabar, the Commissioner of Police, Mr Hafiz Inuwa, said that the suspects committed the crime on February 23 in Calabar.

According to Inuwa, the victim claimed that she was offered a bottle of drink suspected to have been drugged which she took and became unconscious

“On February 23, a young lady reported to the police that she was invited by one Inyang Akwanyene to a guest house at Atimbo road in Calabar.

“On arrival at the guest house, she met Akwanyene and his friend, Ibah Edet.

“Thereafter, the duo forcefully had unlawful carnal knowledge of her and videotaped all that transpired which they later used in intimidating and demanding ransom from the victim.

“They threatened to make it viral to the public if she failed to comply with their demands,’’ he said.

The Commissioner explained that during interrogation, the suspects confessed to the crime, adding that the phone used for the recording was recovered from them and would be tendered as an exhibit in court.

He added that medical examination had been carried out by a qualified medical practitioner to know her health status.

But Akwanyene told the NAN in an interview that he did not drug the victim.

“I invited the lady to the guest house but I did not drug her. I was only framed up by her brother that I drugged her.

“I and my friend had sex with her but we did not rape her because she agreed to make love to both of us. The only mistake we did was to record all that transpired,’’ he confessed.

“On the March 5, we arrested one Friday Odok and Humphrey Nku for allegedly stabbing one Muji Peter to death in Boki Local Government Area after a scuffle ensued over their affairs with women.

“Also, on March 8, we got a tip-off that some five young men suspected to be yahoo boys were sighted at Itu Street with the intent to commit a crime. Our SARS operatives swung into action and the boys were arrested.

“Between February and now, we have arrested 47 suspects for various heinous crimes in the state. We recovered 18 firearms from them,’’ he said.

He called on members of the public to always avail the command with useful information that would lead to the arrest of suspected criminals in their respective areas,’’ he said.