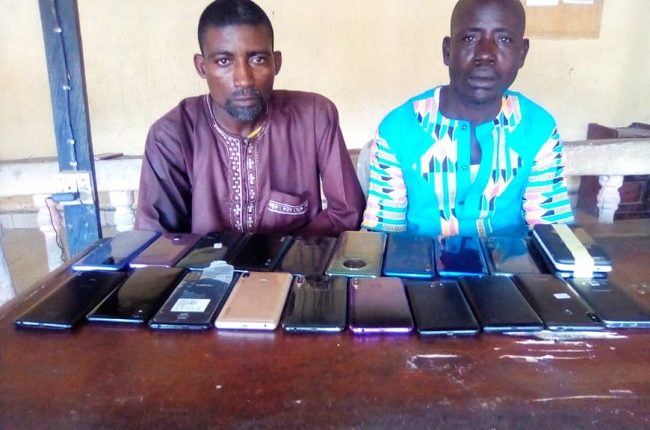 Share
The Bayelsa State Police Command says, it has arrested two men allegedly specialized in buying and selling stolen properties, while they were attempting to transport 23 stolen android mobile phones from Yenagoa to Kano State.
The police in a statement signed by the Police Public Relations Officer (PPRO), SP Asinim Butswat, gave the identity of the stolen property dealers as Yusuf Abubakar, 51-years-old male, and Lawali Aliyu, 40-years-old.
Parts of the statement read “operatives of the Bayelsa State Police Command have arrested two suspects in possession of twenty-three (23) stolen android mobile phones.
“The suspects, Yusuf Abubakar ‘m’ 51years and Lawali Aliyu ‘m’ 40 years were arrested by SWAT Operatives, at Akenfa, Yenagoa on 14, March 2021, at about 2:00 pm, while conveying the phones to Kano State, in a Toyota Hiace Bus with Reg No. DUT 37 ZB.
“The Commissioner of Police Bayelsa State Command CP Mike Okoli, calls on members of the public whose phones were stolen recently, to contact the Police Command for possible identification and recovery.
“Meanwhile, the investigation is ongoing to unravel the source of the stolen android phones.”

“Please do not talk to my father. He is yet to come to terms with the death of his son. It is a most tragic experience. How does one quantify the loss of a dear brother? My brother was killed like an animal by two herdsmen. His offence was that he asked them to drive their cows off his already cultivated farmland,” Bisi Olaosepin, whose brother was hacked to death, struggled to hold back his tears as he relayed to Sunday Tribune the horrible experience that culminated in the passage of his brother… | recover phones in Bayelsa | recover phones in Bayelsa

FGN releases over N554M to Jigawa for free basic health care of 54,000 vulnerable