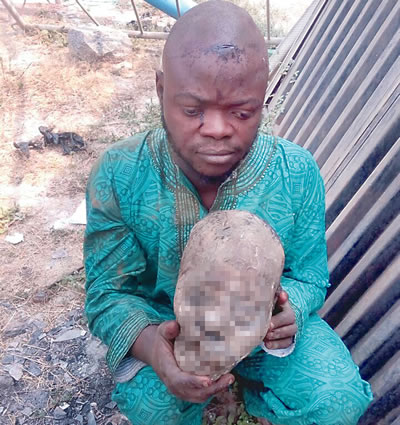 The Ondo State Police Command has arrested two suspected ritualists in the state, Idris Sule and Alfa Alhassan, after discovering a human skull and two roasted hands in their possession.

The State Police Public Relations Officer (PPRO) Mr Femi Joseph, who disclosed the arrest of the two suspects explained that Sule, a 50-year-old farmer and the native doctor was arrested in Ido-Ani in Ose Local Government Area of the state with the human parts.

According to him, Sule confessed to the crime which led to the arrest of Alhassan, an Islamic cleric, who was said to have ordered Sule to bring the human parts.

Joseph said “this morning a 50-year-old suspected ritualist was caught with a human skull and two arms badly roasted along Ido -Ani area of the state.

“The suspect confessed to the crime and led to the arrest of Alhassan but an investigation has commenced into the matter and details will be made known to the public soonest,”

The PPRO however, debunked the story that the arrested suspects are a pastor saying the suspects were arrested in Ido -Ani and not Alagbaka area in Akure as being speculated by some people.

He described a story being circulated on social media as untrue saying no man of God was caught and arrested with 17 fingers human skull and some other parts.

He noted another story about the killing of another football player in Ore town, Odigbo local government area as untrue and a story without substance.

He said “the two alleged incidents are figments of the imagination of the author who was just out to hoodwink the reading public.

“There was no such arrest anywhere in Akure, the writer of the story quoted Ondo police image maker as SP Chike Emmanuel and Elisha Speeded as Police Commissioner.

“This is another blatant lie as no officer bear such names in Ondo command. We advise people to always cross-check their fact before publication

“Our findings revealed that there was no report relating to the arrest of any footballer by SARS operatives or any officer anywhere in Ondo state.

“Whoever has any information to the contrary should come to the office of the commissioner of police to complain.

Group calls on government to invest in community development