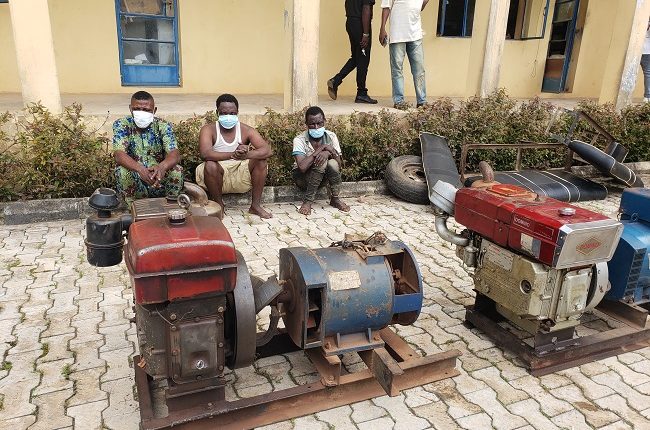 Police from the Ondo State Command, on Tuesday, arrested three suspected thieves who specialise in stealing generating plants from offices in the state capital of Akure.

The three suspects were heading towards Ibadan before they were stopped by the leadership of the Ondo chapter of the National Union of Road Transport Workers (NURTW) after signalling to the Osun State chapter.

The prime suspect, Babajide Moses, who confessed to the offence said he usually travelled down to Akure from Ikorodu in Lagos State, to break into people’s offices or homes to steal generators and sell off the stolen generators in Owode Onirin in Kosofe Local Government Area of Lagos State.

According to him, he contacted the driver of the vehicle around 10 pm and negotiated with him while he engaged some Hausa labourers to loose the generating set and loaded them into the vehicles.

He confessed that he had earlier stolen two generating sets and disposed of it in Lagos at the rate of N200,000 each before he was arrested by the team of CID from Ondo State while moving the generating plants to Lagos.

The 38-year-old confessed that he intended stealing one generating set before finding out that there was another one close to the one he was about to steal and decided to steal the two in an office located FUTA North Gate area of Akure.

But the driver of an 18-seater Mazda bus, Bolaji Arowolo, said he was engaged by the prime suspect, Moses, saying he never knew the generators were stolen goods.

He explained that he negotiated with the suspect who agreed to pay the sum of N35,000 for the two generating plants from Akure to Ibadan.

Speaking on the arrest, the state Police Public Relations Officer (PPRO), Mrs Funmilayo Odunlami, explained that detectives from the command swung into action after the owners of the Lister engines contacted the police on Monday night that their generators had been stolen.

She said investigations led to the arrest of the culprits when police chased them to Ilesha where they were arrested along Akure/Ilesha Expressway.

The spokesman to the state Police command assured us that the suspects would be arraigned after the investigation is concluded.

Edo Catholic priest was only tortured, not kidnapped ― Benin Diocese

Gunmen kill four, abduct one in attack on Sokoto community