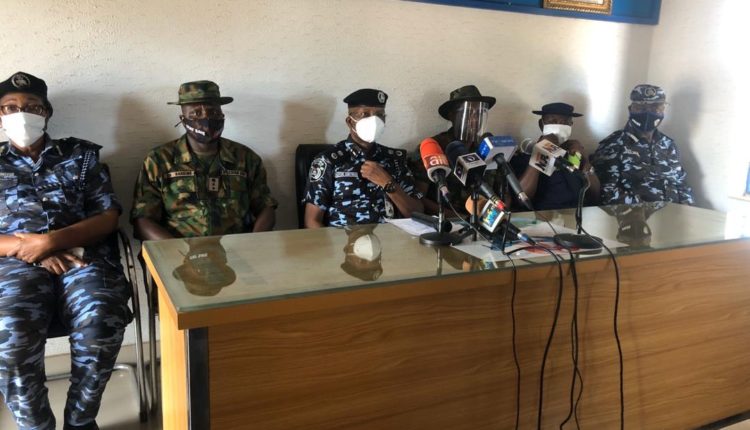 Kwara State Police command has said that it has arrested some of the hoodlums that took part in the looting of public and private property, adding that efforts are on to arrest those on the run.

Speaking while adressing a joint press briefing alongside other service commanders at the police headquarters in Ilorin on Saturday, the state commisioner of Police Kayode Egbetokun said that all criminal elements arrested for looting public properties as well as disposesing innocent citizens of their valuables will be made to face the consequences of their actions.

He said the command had after receiving an intelligent report on the planned attack by the hoodlums, drafted men of the force to strategic locations to prevent the happenings.

Egbetokun explained that the hoodlums, who are not part of those who took part in the peaceful #ENDSARS” protest, stormed the  Cargo Terminal at the Ilorin International Airport in their thousands where some palliative items were kept and emptied it.

He said the criminal act did not stop at that as the hoodlums headed to Agro-Mall , Shopprite, and other private places and looted them.

The police Commisssioner said the hoodlums are the only one on the streets dispossessing passersby of their valuables.

He urged parents to warn their children on the consequences of criminal act.

Egbetokun appealed to the residents of the state to remain indoors while the period of the curfew lasted.

Lagos Govt Lists 24 Policemen Under Criminal Prosecution
Lagos State government has unveiled a list of 21 ongoing cases where its officers are currently prosecuting criminal cases against erring policemen that trampled on the fundamental human rights of Lagosians. The State Attorney General and Commissioner for Justice, Mr Moyosore Onigbanjo (SAN), made this known in a release made available from his…

Why Nigeria Can’t Live In Peace ―Femi Adesina
Presidential spokesman, Femi Adesina has spoken on the recent violence in Nigeria, opining that the reason Nigeria has not experienced peace is due to hatred. In a statement he released on Thursday, ‘If Nigeria dies, hatred killed her,’ President Buhari’s Special Adviser, Media and Publicity…

We Have Received Allegation Of Shooting Of Protesters In Nigeria, Says International Criminal Court
The International Criminal Court on Thursday spoke on the Tuesday’s shooting of #EndSARS protesters at the Lekki Toll Gate in Lagos State, saying it has received information about the incident. The shooting has attracted global outrage against the Nigerian authorities. The number of deaths from the incident is yet to be…

Buhari Mourns Dead Policemen, Keeps Mum On Victims Of #EndSARS Protests
President Muhammadu Buhari, on Thursday, in a nationwide broadcast paid tribute to officers of the Nigerian Police Force who died in the line of duty during the various #EndSARS protests across the country. He however did not speak on the various victims killed or injured during the protests across the…

Your Pronouncements On #EndSARS Protests Hasty, Buhari Tells International Community
President Muhammadu Buhari, on Thursday, came hard on the country’s neighbours and the international community over their comments and pronouncements on the #EndSARS protests, saying their judgment about the situation is hasty…

Buhari Calls For Peace, Keeps Mum On Lekki Toll Gate Shootings
President Muhammadu Buhari, on Thursday, urged Nigerians to embrace peace but did not speak on the shooting by Nigerian soldiers of #EndSARS protesters at the Lekki told gate in Lagos State. The president also came hard on the international community who have spoken over the protest and shooting, urging them to seek to know all the facts available before taking a position or rushing to judgment…