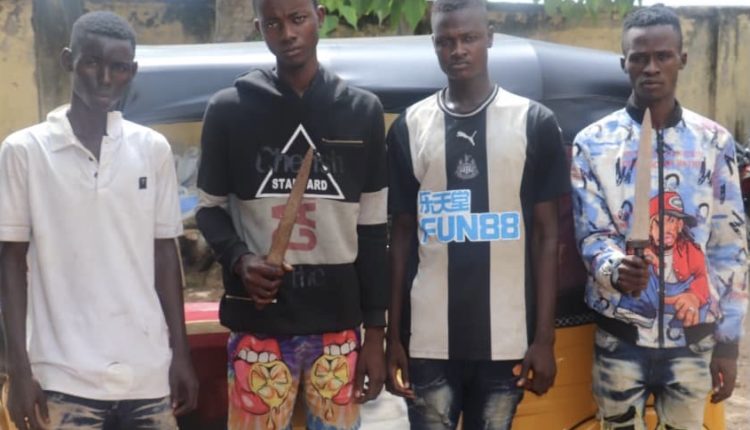 Police in Niger State has announced the arrest of four suspects over allegations of criminal conspiracy and robbery, adding that the suspects were in the habits of carrying out their criminal activities between Minna and Suleja axis of the state, while three arms were  said to have been recovered from them as exhibits.

The Imagemaker of the State Police Command, DSP Wasiu Abiodun stated this in a press statement he issued and made available to the newsmen on Sunday in Minna just as he identified the suspects as: Adamu Mamman( a.k.a. Gambo), age 20 years; Ukasa Umar, age 20 years; Hasmsu Garba, age 22 years and one Naziru Mohammed age 20 years, all ‘M’ of Bosso Area of Minna respectively.

He stated further that police operatives attached to Tundun-Wada Division of the State Police Command while on patrol along Tunga/ Chanchaga road on 21/08/2021 at about 2140hrs, arrested the suspects at Farm-centre area of Chanchaga Local Government Area of the state (within Minna Metropolis) when the suspects were allegedly robbing a female victim with two knives inside a tricycle.

DSP Abiodun further narrated that “the victim attempted to board a tricycle (Keke-NAPEP) from Tunga to Chanchaga, while the suspects who disguised themselves as passengers in the tricycle marked MNA 455 VM, suddenly alighted with two knives, attacked and robbed the victim of her purse containing about N55,000.00 and her Infinix Hot 5 handset valued at about N41,000.00.

The statement added that no sooner that the female victim was forcefully dispossed of both  her money and mobile phone, that she immediately raised an alarm which alerted the police patrol team, while the hoodlums quickly zoomed off in their tricycle after robbing her.

DSP Abiodun noted that after a hot chase by the police patrol team, the suspects were apprehended, adding that during interrogation, the suspects allegedly confessed to the crime while the two knives and the tricycle used in committing the crime were recovered in their possession.

He, however, stated that the case was still under investigation, saying, “the suspects will be arraigned in court as soon as investigation is concluded.”