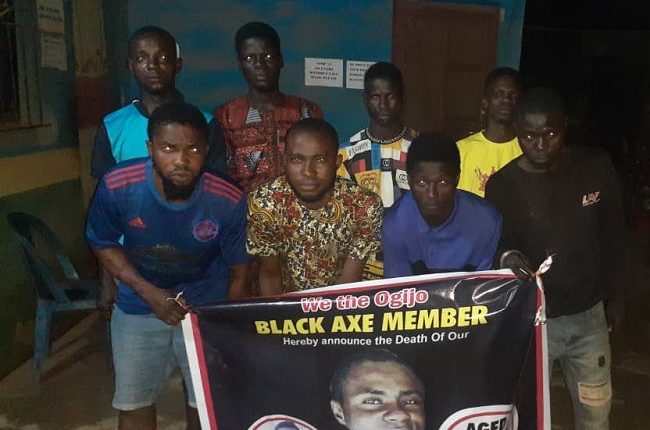 Eight persons suspected to be members of a cult group, Neo Black Movement (Black Axe), were arrested by the Police in Ogun State during a candlelight procession in honour of their departed member.

They were arrested on Saturday in Ogijo area of Sagamu Local Government following a report that a 16-year-old boy, Onome Iduru, was shot by a group during a funeral procession.

The victim was said to have been dispossessed of his valuables while the incident caused unrest in the community.

The Police Public Relations Officer of the State Police Command, Abimbola Oyeyemi, said the Police had an encounter with the suspects before they were eventually arrested.

The Divisional Police Officer of Ogijo, CSP Muhammed Suleiman Baba, was said to have led his men to arrest the suspects.

Oyeyemi said the group’s insignia used to announce the death of their member was recovered from them while the injured victim was taken to Oladayo hospital for medical attention.

The PPRO added that the suspects had been transferred to the State Criminal Investigation and Intelligence Department on the directive of the Commissioner of Police, CP Edward Ajogun.

Ajogun said activities of any individual or group who engaged in things that could undermine the peace of the state would be dealt with decisively, advising parents to warn their wards not to be part of any unlawful act.

TRUE! FG is providing COVID-19 funds for MSMEs in Nigeria