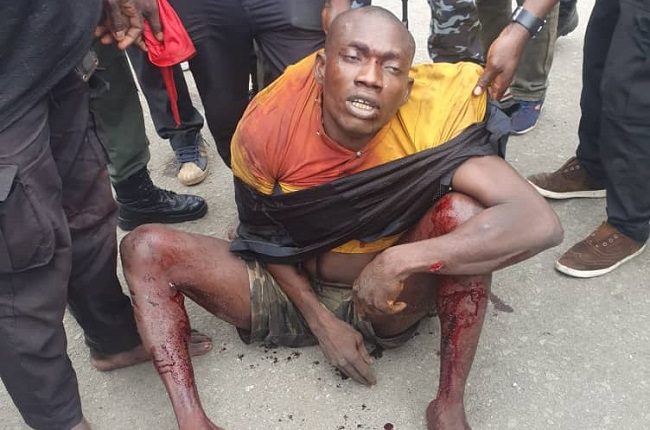 The Police Command in Rivers has confirmed the arrest of one Honest Diigbara, allegedly described as “the most wanted” kidnapper, armed robber and contract killer in Rivers.

The Commissioner of Police (CP) in the state, Joseph Mukan said in a statement in Port Harcourt, that Diigbara was arrested during a sting operation launched by the command on Saturday.

“The notorious gang leader, Honest Diigbara aka Boboski, who had been on the Police watch list was declared wanted and the state government placed N30 million bounty on him.

“The gang leader was arrested at the early hours of Saturday in a sting operation of the command with the assistance of a local security outfit,” he said.

Mukan said that the suspect was arrested from his hideout in Korokoro community, Tai Local Government Area of the state through the help of credible informants.

He said that the suspect and his gang on sighting police operatives advancing towards their hideout, began shooting, resulting in exchange of gunfire with the police.

The CP said that the superior firearms and proficiency of police operatives overpowered the gang of criminals, leading to the arrest of Diigbara and his driver.

“Among the alleged crimes committed by Diigbara and his gang include the kidnap of Barrister Emelogu, who was kidnapped and killed after they collected ransom.

“Diiagbara also allegedly masterminded the killing of a soldier and personnel of the Nigerian Security and Civil Defense Corps (NSCDC) at Gio pipeline, Ogoni in 2019.

“Also, they kidnapped Chief Mbu of Ogu/Bolo and collected N7 million as ransom and they killed two police officers attached to the Federal Highway and collected their rifles at Botem,” he said.

Mukan urged the people to trust the police to protect them and their property, warning criminals to relocate from the state or be ready to face the wrath of the law.

TOUGH POLICIES: IMF, World Bank Take Over Nigeria’s Economy •More Pains Ahead For Nigerians
ALTHOUGH this seems a difficult period for Nigerians, Sunday Tribune investigations have, however, revealed that it  could actually be a signal to the beginning of more unbearable pains in the form of economic policies as the Federal  Government continues to implement the stringent conditions of its international creditors…Police arrest Boboski  Police arrest Boboski

High Cost Of Fuel, Electricity Will Ruin Our Lives — Market Leaders, Business Owners Lament
CONDEMNATION of the hike in petroleum products and electricity went notches higher at the weekend as more  Nigerians flayed the decision of the Federal Government to take such a decision not minding the fatal blow dealt the economy by the coronavirus pandemic…Police arrest Boboski  Police arrest Boboski

Banditry: Matters arising as Buratai comes to the rescue